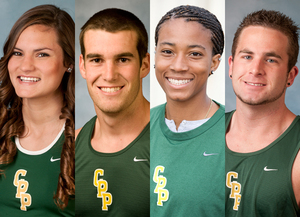 Look out Turlock. Heather Corder, Jacob Deavers, Tramieka Thomas and Lance Walkington are coming to your town to set some high marks at the NCAA Division II Championships held later this month.

The four members of the Cal Poly Pomona men’s and women’s track and field teams earned a spot at the national event for the first time in their Bronco careers. The championships take place on the campus of Cal State Stanislaus beginning May 25.

“These four have a great opportunity to become All-Americans,” Broncos’ head coach Troy Johnson said. “They’re at the top of their game right now and it’s the perfect time. Nationals can intimidate a lot of athletes but I think that the recent championship-type meets have prepared these four to handle it all.”

Despite being in her first year of collegiate competition, Corder has put together an impressive 2011 campaign. The Murrieta, Calif., native holds the 13th-best 100-meter hurdles time so far this year. She raced that event in 13.99 at the Cal State L.A. Last Chance Meet on Saturday.

Deavers continued to tear up the track through April and May, showing tremendous potential as he heads into Turlock. The junior from Lake Elsinore, Calif., will compete in the 400-meter hurdles, where he posted a 52.58 mark on May 1 at UC Irvine.

Also coming on strong in the past few weeks, Thomas has earned the chance to compete in two championship events. She’ll join her teammate Corder in the 100-meter hurdles, where she used a 14.10 time at Cal State L.A. to qualify. Thomas recorded her qualifying mark in the long jump on May 6 at the California Collegiate Athletic Association (CCAA) Championships in Turlock, going 19-2.75.

The first CPP student-athlete to qualify for the national championships, Walkington earned a spot after going head-to-head with the nation’s best on March 26 at the Cal-Nevada Invitational. The final at that meet in the javelin throw featured Walkington and UC San Diego’s Nick Howe, the 2010 NCAA Division II national champion in the event. On his three final tosses, Walkington came away with 211-3, 198-11 and a school record 222-0. Howe edged his competitor by two inches on the last throw, going 211-3, 197-7 and 222-2.