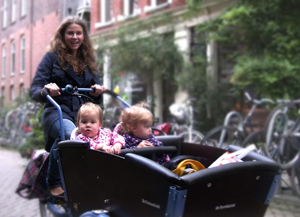 Some people view their bikes as a piece of recreational equipment — something to pull out of the garage and dust off on a sunny day. In his documentary “Riding Bikes with the Dutch,” filmmaker Michael Bauch shows that it can be much more.

The film compares the car-centered culture of Los Angeles with the bicycle-centered culture in Amsterdam. It also tracks the beginning of a “bike movement” in Long Beach, where bike paths are being built and people are encouraged to start pushing bike pedals.

When he visits Cal Poly Pomona on Wednesday, May 18, Bauch won’t necessarily advise people to sell their cars but he will encourage a “car lite” lifestyle.

In celebration of the campus’ Bike Week, the university show Bauch’s documentary and host a Q&A with him at noon in the Centaurus room of the Bronco Student Center. A second showing of the film will be at 1 p.m.

“A lot of people don’t realize that most of their car trips are very short,” says Bauch, a 1995 alumnus in telecommunications. “Going to the supermarket, going to the post office, they’re just one- or two-mile trips. The average person could easily bike that.” 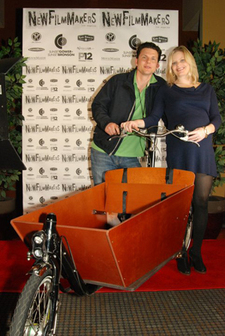 Using a bike to run to errands is a great form of exercise and a way to spend time with loved ones, Bauch says. His documentary also highlights how a bike-friendly community benefits everyone, not just the cyclists.

“In Long Beach, they have recently added miles of bike paths, bike boulevards, sharrows and cycle tracks,” he says. “Many routes go through compact business districts. It gets people to slow down and see the sort of businesses that are in their neighborhoods. Pedestrians feel safer, there’s less strain on parking, and it’s helping the businesses. Other routes connect schools, giving students a safe way to get to class on two wheels.”

To watch a trailer of “Riding Bikes with the Dutch,” go to www.youtube.com/watch?v=yU5ScmJrp1c.

For details about Bike Week at Cal Poly Pomona, visit the Rideshare website at https://dsa.cpp.edu/parking/rideshare.asp?nfid=4688.

(Top photo: A mother rides with her children in a box bike. Bottom photo: Michael and Rachel Bauch)