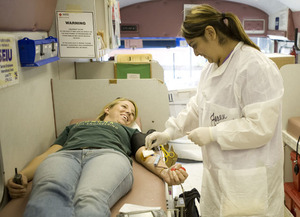 Cal Poly Pomona students prevailed in the fifth annual “Out for Blood” competition against Mt. San Antonio College, taking home the trophy and rewarding the Red Cross with nearly 400 donations collected in October and April.

David Hofferber, a manufacturing engineering senior, has an O positive blood type and donates whenever he can.

“It’s a way I can give back that really doesn’t affect me too much,” Hofferber says. “It takes 30 minutes to an hour and it’s just something I can do to help out.”

There is no reason for students not to donate, Hofferber adds.

“I know a lot people don’t donate because they really can’t stomach it, but if you have the physical capability to, there’s really no reason not to,” he says. “It doesn’t take that much time, really doesn’t affect you in the long run, and you’re helping people that are injured that need it.”

Students who donated blood were given refreshments and snacks, as well as tickets to the Laugh Factory comedy club in Los Angeles and coupons for a free meal at Chick-fil-A in the City of Industry.

“It’s a noble effort to donate if you’re able to,” Jackley says. “You know that you saved three people’s lives.”

Although Cal Poly Pomona won the competition, the amount of blood collected was less than in previous years. The campus collected 197 pints in October and 200 pints in April, for a total of 397, compared to 429 total pints the previous year. Mt. SAC collected 329 pints.

Donors must be at least 17, weigh at least 110 pounds and be in good health overall. For a full list of requirements, visit www.redcrossblood.org/donating-blood/eligibility-requirements.

Those interested in volunteering for the next blood drive can call Judith Campos at the American Red Cross at (626) 840-0457 or email Jackley at dljackley@cpp.edu.