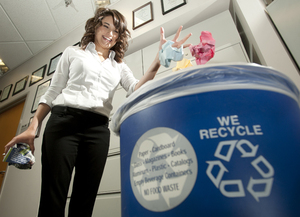 For the second year in a row, The Princeton Review has recognized Cal Poly Pomona for its dedication to green improvements. The university and its sustainable achievements are featured in the “Guide to 311 Green Colleges: 2011 Edition.”

“It’s a real honor to be recognized in the Guide to Green Colleges. The 2010 edition was the first of its kind from The Princeton Review, and we were pleasantly surprised to learn of our inclusion in that publication,” says Meaghan Smith, manager of sustainability in Facilities Planning & Management. “Then to learn our efforts are still so strong that it earned us recognition once again was a real accomplishment.”

The guide is a free downloadable book that lists colleges in the United States with notable achievements in sustainability. Some of Cal Poly Pomona’s accomplishments include: using cleaning products in which 75 percent of them are green-certified, recycling and composting 70 percent of waste, and watering plants with water whereas 99 percent of it has been reclaimed. 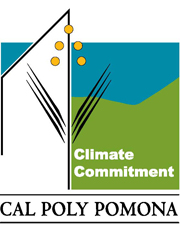 The Climate Commitment Task Force was charged with creating the climate action plan in 2009. The plan lists goals for the campus to reduce carbon emissions and reach climate neutrality (no greenhouse gas emissions) in the next 20 years.

“We are definitely not stopping at 2030. This is something that I think will become a way of life for the university and society,” Smith says.

The 311 schools highlighted by the guide were chosen out of a list of 703. Colleges were surveyed based on their sustainability initiatives and those which scored in the top 80th percentile were chosen for the guide. Likewise the guide does not rank the schools listed in the guide, rather they are listed alphabetically. Individuals who wish to see Cal Poly Pomona’s profile in the guide can visit www.princetonreview.com/green-guide.aspx.