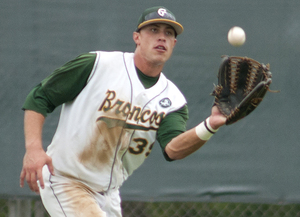 Seniors keyed the Broncos to the win, as Travis Taijeron collected a team-high three hits and Tyson Edwards tallied a team-high three runs batted in. Senior reliever Michael Parker closed the contest with 3.1 scoreless innings, earning the win to improve his record to 3-2.

Next up for CPP will be a 6 p.m. contest on Friday against either top-seeded UC San Diego or fourth-seeded Sonoma State, whichever team wins the Thursday 6 p.m. game between the squads.

To start Thursday’s meeting between the Broncos and Wolves, Ryan Goodman and Taijeron knocked back-to-back doubles in the top of the first to put CPP ahead 1-0.

WOU rallied in the bottom of the first, notching three scores with the big hit coming in the form of a two-run double by designated hitter Bo Folkinga. While Wolves’ starting right-hander Grady Wood started to work out of the next few jams, the WOU offense tacked on another run in the fifth thanks in part to a one-out triple from Daniel Dillard.

The Broncos’ attack broke though against Wood in the top of the sixth, as a one-out rally was initiated after Jenzen Torres and Chris Miller were both hit by pitches in back-to-back plate appearances. The next hitter, Edwards, lined a double into right field to score both Torres and Miller. Later in the inning, Edwards crossed home on a wild pitch to even the score at 4-4.

CPP tacked on the deciding scores in the eighth with a huge six-run rally. The Bronocs got their first three hitters on base – Taijeron, Torres and Miller – against reliever Travis Bradshaw. Edwards then earned a sacrifice fly to put the Broncos ahead, 5-4.

The designated visiting team, CPP, ended up registering five more runs in the inning, including a two-run double from Jordan Whitman that fell just a few feet short of being a grand slam.

After Broncos’ right-handed starter Erick Ruvalcaba finished with 5.2 strong innings, Parker closed the game out with 3.1 innings of one-hit ball. The senior right-hander struck out a career-high six.

Bronco Athletics will have live audio of the game. Live streaming video and real-time stats will also be available.