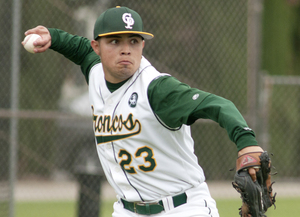 The 17-year wait is over. The Cal Poly Pomona baseball team is moving on to the NCAA Division II postseason.

On Sunday night during the NCAA Tournament selection show, the CPP fans, coaches and student-athletes learned that the 48-team field features the Broncos as the West Region’s No. 3 seed. The regional tournament hosted by UC San Diego will start with CPP challenging second-seeded Western Oregon on Thursday at 1 p.m.

Bronco Athletics will have live audio of the game. Live streaming video and real-time stats will also be available.

The other West Region matchup on Thursday will be the top-seeded Tritons of UCSD hosting fourth-seeded Sonoma State at 6 p.m.

The Broncos’ first opponent, the Wolves of WOU, captured the Great Northwest Athletic Conference (GNAC) title while carrying an overall record of 37-13.

“We don’t know a whole lot about them but we know they come from a solid baseball conference,” Betten said. “It should be a fun challenge for us.”

Despite holding the No. 5 ranking in the last regular season West Region poll, the Broncos assured themselves an at-large bid with a spectacular performance at the California Collegiate Athletic Association (CCAA) Tournament in Stockton. After falling to UCSD in first-round action, Cal Poly Pomona stormed back to eliminate SSU and Chico State Friday.

The Broncos, needing two wins over the Tritons to capture the tournament crown, captured a 14-12 victory to start Saturday but fell 9-2 in the finale.

While this is the first time in the field since 1993, this season will mark the eighth all-time appearance in the NCAA postseason for Cal Poly Pomona. The Broncos captured national championships in 1976, 1980 and 1983.

(Photo: Erick Ruvalcaba fields a ground ball and throws to first base during a game against Concordia University April 20, 2011.)