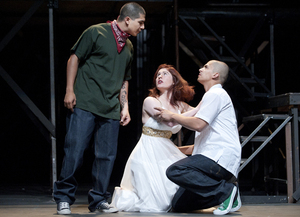 The theatre department presents Luis Alfaro’s “Oedipus El Rey,” a modern interpretation of Sophocles’ tragic play “Oedipus Rex.” The show will open Friday, May 13 at 8 p.m. and run through May 22.

“Oedipus El Rey” is set in modern East Los Angeles, a far cry from 500 BC Greece, the setting of the original play, and explores Chicano culture through all Mexican-American characters and scattered use of Spanish language. The play tells the story of a young man straight out of prison, struggling to fight his destiny and become king of an L.A. barrio. He is strong and ambitious, but his hubris angers the gods.

Directing “Oedipus El Rey” was an exciting experience for theatre Associate Professor Bernardo Solano. He had already begun working on the play when Alfaro contacted him about a new draft.

“Just before we started our rehearsal process a new draft came in,” says Solano, a three-time recipient of a Fulbright award. “The designers and actors had already looked at the previous draft, and now things were changed. Scenes were moved, some radically rewritten, characters were put into a scene where they hadn’t been before.”

Far from being stressed, Solano loved the challenge.

“It’s very fun and exciting for me to be directing a play that is still evolving. If we were to do the original Oedipus, we would pretty much have to do it as written, but this way it’s not set in stone.”

“We want to combine traditional aspects, like a textured paper feel, with modern video animation,” Cabrera says. “I don’t want to reveal too much. It will be very interactive with the actors.”

While the theatre department’s productions have featured digital projections in the past, this is the first time it has tried animating the backgrounds.

“Digital scenery is a new frontier,” Solano says. “You don’t have to build three sets at enormous cost and time and energy anymore. Instead you can have three images that change in the blink of an eye. Your imagination is the only limit.”

Luis Arredondo, a third-year theatre major, acts as part of the “coro” in the play, a modern version of the Greek chorus. Arredondo believes that the plays themes are applicable to everyone. “It asks the audience a universal question: Are we really in control of our lives?”

To watch a video preview of the show, go to www.youtube.com/watch?v=vJSi60GGkjs.