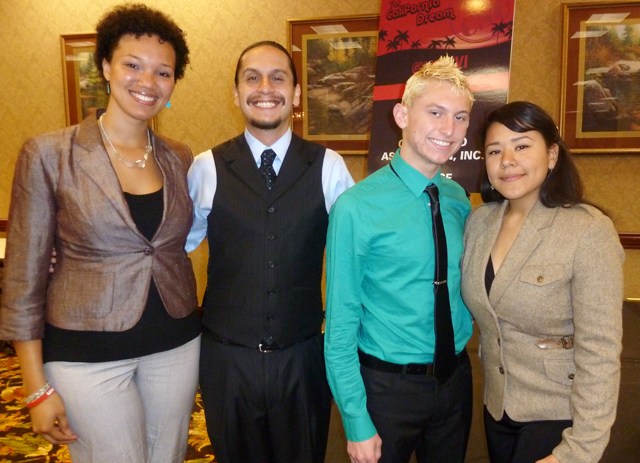 Political science student Robert Ward, who holds a few leadership positions on campus, was seeking additional training that would improve his management skills.

“The main takeaway that left with was that as a student, you are responsible for your own education,” says Ward, who is running for the ASI Multicultural Council senator-at-large position. “They reminded us that we are adults, and although we must respect administration, in the end we are allowed to ask questions and challenge them. We as students don’t have to just take the punches, we can fight back.”

Cristina Aceves, a liberal studies student, was inspired by workshops about multicultural and minorities issues in higher education.

“I felt moved by the California Dream Act and the contributions undocumented students contribute to the CSU and California,” says Aceves, who is running for the CEIS senator seat. “While one of the keynote speakers, Dolores Huerta, was presenting her speech I felt inspired to continue advocating for quality education and acknowledging Que Si Se Puede!”

During their time in Sacramento, students met with staff members of several state representatives, including those of Assemblyman Curt Hagman (R-Chino Hills), state Senator Gloria Negrete McLeod (D-Chino), and Lt. Gov. Gavin Newsom. They promoted the “Made in the CSU” campaign, urging state leaders to invest in higher education and the CSU.

“Our main points were to really put a face to the cuts that are potentially going to rock the CSU system,” Ward says. “It’s easy to cut a department to save a few dollars but it’s tougher to do so when you know who you are affecting.”

Students shared personal stories about how budget cuts would affect their lives, as well as facts about the value of the education — every dollar that the state invests in the CSU generates $5.43 in return.

“We are an investment, not just a sponge soaking up state funding,” Ward says.