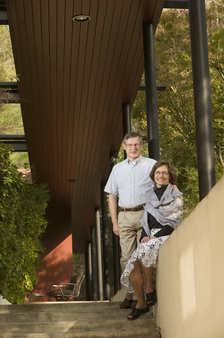 Steve and Marian Dodge, longtime supporters of the university and patrons of modern architecture, have pledged $3 million through a bequest gift to advance the study of modern architecture in the College of Environmental Design. Their bequest includes their Los Feliz home, an architecturally significant building designed by architect Raphael Soriano.

“The forward thinking of Steve and Marian is a testament to their long-term vision and their commitment to supporting higher education,” says Dean Michael Woo. “Their vision allows them to fulfill their passions, benefit the College of Environmental Design and its students, as well as to preserve one of Los Angeles’ architectural treasures for future generations.”

The Dodges’ connection to the university was built upon several meetings with Soriano while he was an instructor at Cal Poly Pomona in the late 1980s. After his passing, the university retained his drawings and professional materials and established the Soriano Collection and Archives. A later visit to the Neutra VDL II Research House in Silver Lake informed them on how the college has maintained the former studio and residences of Richard J. Neutra, a leader of the modern architecture movement, and has made it available for students and the greater design community.

“As a teacher, I know how important education is. We also both love modern architecture,” Marian says. “This way, we can honor both of those passions. It’s a win-win situation.”

The Schrage House, named after the original owners, was built in 1950 with an all-steel framework, floor-to-ceiling windows and Japanese ash interior curtain walls. Since the Dodges purchased it in 1987, they have worked diligently to restore the house and grounds to their original condition, repairing the radiant heating system, replacing the roof, tearing out the carpet and opening up the original patio, which had been converted into a room.

“Our house is one of about six that Soriano designed in the late-40s and mid-50s. It’s one of only two buildings that are in any kind of original shape,” Steve says. “When we arrived, it had been almost destroyed, but we recognized the bones were still here. We’ve tried to restore the house as close to the original as we could.”

Part of the home’s charm is the silence, Marian says.

“Our friends all comment on how quiet it is because the front of the house doesn’t face the street,” she says. “We are right on the boundary of Griffith Park. We have one oak tree in the yard, but we also have all of the oaks in Griffith Park. We get all of the wildlife, too.”

The couple has also provided for an endowment that will ensure the continued care and maintenance of their home.

“Steve and Marian are a wonderful example of how anyone can make a difference when they choose to support higher education. Their endowment ensures that their gift to the university will make a lasting impact on students,” says university President Michael Ortiz. “By investing in higher education at Cal Poly Pomona – no matter how big or small – you can change lives.”