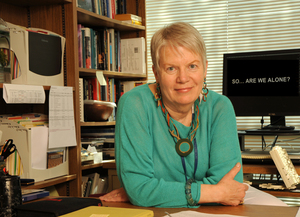 If humans share the universe with other intelligent life forms, the proof will probably not come from green or gray creatures arriving in spacecraft, but from faint signals captured in the mountains of Northern California. At the Hat Creek Radio Observatory, an array of telescopes sweep the sky and aim at distant stars, all probing for signs of interstellar communication. It’s known as SETI – the Search for Extraterrestrial Intelligence.

Jill Tarter, director of the SETI Institute’s Center for SETI Research, will discuss “Are We Alone?” at Cal Poly Pomona on Friday, May 6 at 7 p.m. The presentation, which is free and open to the public, will take place in the Ursa Major C room of the Bronco Student Center. Parking is free after 6 p.m.

Tarter, a seminal figure in astronomy, has received the Lifetime Achievement Award from Women in Aerospace, as well as two Public Service Medals from NASA. She is perhaps best known to the public as the basis for the character portrayed by Jodie Foster in the 1997 film “Contact.”

“Dr. Tarter is the world’s leader in the field of SETI, and her presence on campus will excite and inspire people to think about these deep issues of whether we humans are unique in the universe,” says physics and astronomy Professor Alex Rudolph. “If the answer is ‘no,’ that would change our entire conception of ourselves as a species and would make our current national rivalries seem very provincial.”

The SETI Institute, which was founded in 1984, has a mission to “explore, understand and explain the origin, nature and prevalence of life in the universe.” As well as searching for signals from ET, scientists at the SETI Institute also study planetary geology, the early solar system, and the biochemistry of extreme and early life on Earth. As a nonprofit organization, the center relies heavily on corporate and individual sponsorship, as well as government-funded research.

In a speech at the TED Conference in 2009, an event focused on the power of ideas, Tarter addressed a question humans have puzzled over since they first began looking skyward.

“Is it really just us? Are we alone in this vast universe?” said Tarter, who in 2008 received TED’s “change the world” prize. “What if we’re not? What if, out there, others are asking and answering similar questions. What if they look up at the night sky at the same stars, but from the opposite side? Would the discovery of an older cultural civilization out there inspire us to find ways to survive our increasingly uncertain technological adolescence?”