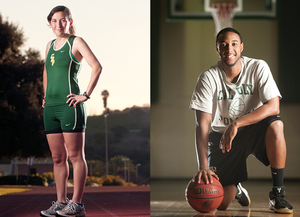 Cal Poly Pomona athletes have a tradition of success, winning more national team titles than any other current Division II campus in California. While the students’ athletic abilities put them in the spotlight, they often excel in the classroom as well.

Among the 185 student-athletes who are balancing their academic, social and athletic responsibilities are Sarah Garcia and Dahir Nasser.

Standing at 5-foot-2, Sarah Garcia is not the most imposing figure on campus, but her accomplishments as a Bronco stretch for miles.

During the fall quarter, Garcia led the women’s cross country team to its first NCAA Division II National Championships appearance since 1985. The squad set a list of goals at the start of the season and one by one crossed them off. After their performance at the regional race that qualified them for nationals, it took a few moments for the Broncos to realize what they had accomplished.

“We were walking off the finish line over to the results,” says Garcia, a team veteran and leader. “We heard our team name announced but we couldn’t hear what place we got. Finally, someone said we got fourth, which was enough to advance to nationals, and we just froze. ‘We did?’ ‘We did?’ We were shocked and couldn’t believe it, but once we did, everyone started jumping up and down.”

Being part of the race environment is nothing new to Garcia, who started running competitively in fifth grade. Her father, Ed, who ran as a Bronco and graduated in 1986, now coaches cross country at Sarah’s former school, Valencia High School in Placentia, about a dozen miles south of Cal Poly Pomona.

“My dad taught me a lot about hard work and that I should set goals and go after them,” Sarah says. “The first team I had was so small that we practiced twice a week. He took the time to bring me out on other days and told me that I needed to run more if I was going to improve. He challenged me to be better, both in running and in the classroom. That encouragement continues.”

Garcia’s other passion is physics. Ultimately, she wants to earn a secondary education credential in science so she can return to Valencia High School to coach cross country and teach science.

“Her goals fall in line with what she’s accomplished here at Cal Poly Pomona,” says Troy Johnson, head coach of the Broncos cross country and track and field teams. “Once she’s done with school and moves on to coaching and teaching, Sarah’s going to be able to pull from her experiences of determination and perseverance.”

Those skills recently helped her reach a major academic achievement.

With the encouragement of a faculty adviser, Garcia co-wrote the research paper, “The Impact of the History of Physics on Student Attitude and Conceptual Understanding of Physics.” The paper was accepted and published by the national Physics Education Research Conference, a rare honor for an undergraduate.

“We found that students become overwhelmed with equations, especially if they aren’t as good with mathematics,” she says. “What our research determined was that they could gain a better understanding if the teaching involved the history of physics.”

Making an impact on and off the court is something Dahir Nasser understands well.

The psychology undergraduate played a key role in Cal Poly Pomona’s successful run at the 2010 NCAA Division II men’s basketball national title. His stellar ball-handling skills earned him a spot on the Elite 8 All Tournament Team. However, his teammates and coaches note that his people skills were what really set him apart.

“As Dahir progressed, his leadership naturally emerged,” says Head Coach Greg Kamansky. “He led by example at first, but then started to take time to talk through things with the guys. He knows how to work hard and also knows how to talk to players. They listen to him. They follow him.”

Nasser’s positive attitude and leadership made him a guiding force on the Bronco squad. After playing four years, the Phoenix transfer was hired as a coaching assistant to the Broncos’ squad while he finished up the last few classes for his degree. In his new role, he guides players, oversees study halls, and takes part in recruitment, game planning and strategizing.

As he looked back on his wildly successful final year of college play, Nasser says being a student-athlete isn’t as glamorous as it sometimes appears.

“The funny thing is people assume athletes get preferential treatment, but I think we get it as hard, if not harder, than other students. At an academically tough school like Cal Poly Pomona, it definitely takes hard work and a major commitment to succeed,” he says.

During the team’s title run, Nasser recalled two weeks on the road from Bellingham, Wash., to Springfield, Mass. Somewhere in between the squad fit in final exams.

“Time management is huge, and just knowing you have a goal you’re trying to achieve is big. You’re going to have to push a little bit now, but you’ll be rewarded in the end,” he says.

The rewards are immeasurable. “It definitely complemented my student experience,” Nasser says. “I got to see five or six different states I may never have seen. I got a trip to Hawaii. I got to meet all my teammates and coaches and have a family on campus. That’s something I might not have had since I came from out of state.”

While developing well-rounded stu dent-athletes isn’t necessarily easy, it is critical at Cal Poly Pomona. Each year, a handful of students go on to play professionally, but the vast majority pursue careers in other fields, from food marketing to mechanical engineering.

“We always tell our players, ‘We don’t want your four years at Cal Poly Pomona to be the highlight of your life,'” Kamansky says. “We want more for them. When they’re 35 years old, I want them to look back as successful people in whatever they’re doing.”

While the work can be grueling and the time commitments straining, the student-athlete experience pays off in the long run, he adds.

“As a coach, I don’t focus on wins and losses as much as developing them to be productive people in society. It’s about how you win. How do you work with your team? How do you treat other people? How do you handle adversity? That knowledge transfers over to how to win in a career — working hard and working smart.”