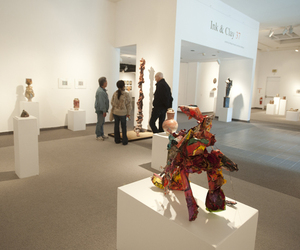 A large red sea urchin covered in small black spikes – “Stronglyocentrotus,” the work of artist Shane M. Keena — sits on a pedestal to the right of the entrance. On the far left wall, Cathy Weiss’ “Breathing in the Light” depicts a woman’s silhouette on transparent fabric hiding from a menacing dark tree behind her. Near the entrance, a juice box with a straw snaking through its sides sits atop a piece of paper bearing images of corn, the work of Andrew De Caen appropriately titled “Thirsty Juice Box.”

These three pieces in the W. Keith and Janet Kellogg University Art Gallery are part of the visually alluring 37th annual Ink & Clay exhibit, a showcase of works from 79 artists throughout the Western United States. Ink & Clay is open to the public from 11 a.m. to 4 p.m. Tuesday through Friday, and on Saturday from noon to 4 p.m. The exhibit runs through April 29, with a reception honoring this year’s artists and award winners scheduled for April 9 from 5 to 7 p.m. 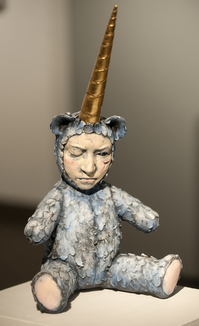 Ink & Clay is an exhibition and competition created to showcase and promote excellence in ceramic arts, printmaking and drawing, says Shari Wasson, the gallery’s curator. “It was brought about and is sustained by the generosity and vision of Colonel James H. Jones, the exhibition’s longtime benefactor and a great friend to Cal Poly Pomona.”

Jones passed away in November 2009, but his legacy continues through his generous endowment.

All artwork for the exhibit must incorporate drawing, printmaking or clay media, and works often include more than one. Because of this broad requirement, a wide variety of designs and themes are on display. All pieces were selected by this year’s two jurors, Allegra Pesenti, curator at the Grunwald Center for the Graphic Arts at the Hammer Museum in Los Angeles, and Kevin Wallace, director and curator of the Beatrice Wood Center for the Arts in Ojai.

In her juror’s notes, Pesenti says she looked for “skilled draftsmanship and … assessed original and thought-provoking content” that would display well in the gallery. Wallace says he “was not looking to be dazzled by technique or overwhelmed by originality. [He] only asked that the work truly express and share the individuality of the artist.” 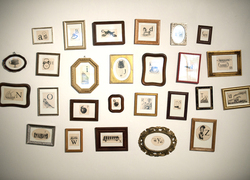