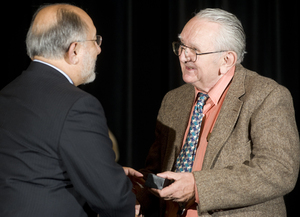 Economics Professor James Sutton, one of the longest-serving professors at Cal Poly Pomona, died at age 77.

Sutton, one of the founding members of the economics department, joined Cal Poly Pomona in 1964 and continued teaching until his death on March 28.

A memorial will be held on May 4 from 5 to 7 p.m. at Kellogg House Pomona. The campus community is invited.

At Cal Poly Pomona, he taught principles of economics, as well as several upper division courses, including public finance, price theory, current economic conditions, national income analysis, mathematical economics, and the graduate business economics course for the MBA program. During his tenure, he initiated the original proposal to offer a master’s degree in economics.

In addition to teaching, Sutton was an active faculty member. He served eight years on the College of Arts Curriculum Committee, including the formative period when the university changed from a satellite campus to a full-fledged state university; 10 years on the Faculty Senate, in which he also sat on the executive committee; and the university’s accreditation committee that obtained Cal Poly Pomona’s first full accreditation. Sutton also served as chair of the economics department and twice held the position of associate dean of arts during Dean Albert Ashenbrenner’s term.

“Despite his brilliant intellect, Professor Sutton is most remembered for the caring and compassion he had for his family, friends and the downtrodden from all walks of life. He is also remembered for his devotion to his students and to Cal Poly Pomona,” says economics Professor Maureen Burton.

A U.S. Chess Federation member since 1991, Sutton played at both the Pasadena and Arcadia Chess Clubs. His highest USCF rating was 1892 points and his top tournament was a first place tie in July 1997.

Sutton was a longtime resident of La Verne, and most recently lived in Pomona. Sutton was preceded in death by his youngest daughter, Nancy. He is survived by his brothers Jack and Gordon Foucault, his ex-wife Dorthy Sutton, and daughters Catherine Sutton and Elizabeth Beattie.