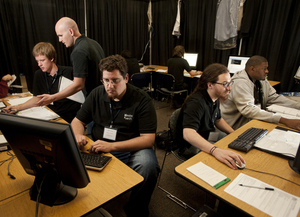 Cal Poly Pomona has proved for the third consecutive year that its students are the best in the Western United States in cyber security.

On the last day of spring break, the students won the Western Regional Collegiate Cyber Defense Competition held on campus. Now, team members will test their skills against some of the best students in the country April 8-10 in San Antonio.

“We practice hard and we’re glad it paid off,” says Cal Poly Pomona team captain Sean Richardson. “I feel really great about moving on to the nationals.”

The team, composed of students from the Business Administration, Science and Engineering colleges, faced 20 hours of intense competition over three days. This year’s competition scenario involved a series of terrorist attacks – both physical and virtual – that shut down U.S. stock trading for several weeks. The students were required to create a West Coast backup operations center while continuing to fend off attacks from hackers.

Other colleges that competed include Cal State San Bernardino, which placed second, and Arizona’s University of Advancing Technology, which placed third.

“Our event offers one of the most technically challenging regional competitions in the country,” says College of Business Administration Professor Dan Manson, who organizes the competition. “Any team that wins our round will perform well in the nationals.”

Richardson, who competed on last year’s Cal Poly Pomona team that placed third in the national round, says the competition becomes more challenging every year. That is why team members began preparing last summer for the three-day event.

Jeff Henbest (computer information systems, ’09) serves as the Cal Poly Pomona team advisor and is a former team member. He now works at Boeing doing cybersecurity work in Orange County along with other members of the 2009 team. 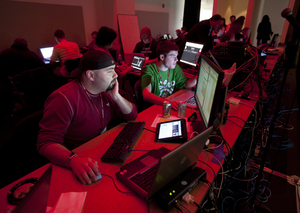 Participating in the cyber defense competition gave Henbest the opportunity to master skills that would have been difficult to acquire in a traditional classroom setting. Henbest says he and other Cal Poly Pomona alumni at Boeing are committed to the competition’s success.

“We really feel that the cyber defense competition was the best thing we did as undergrads and we enjoy returning to help improve the competition in any way we can,” Henbest says.

At the national competition, Cal Poly Pomona will face competitors from institutions such as the University of Maryland, Texas A&M University and the U.S. Air Force Academy.