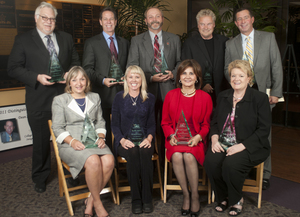 Cal Poly Pomona has honored nine outstanding graduates with the Distinguished Alumni Award, the highest honor given by the Alumni Association. The awards program recognizes alumni who demonstrate extraordinary professional achievement, community involvement and service to the university.

Representing each college in the university and athletics, the 2011 recipients were celebrated at the Distinguished Alumni Awards banquet on April 15.

Lisa Alley-Zarkades (’82, Food and Nutrition)
Alley-Zarkades’ fascination with animal health led her to research ways to provide products to pet owners and improve animals’ lives. Alley-Zarkades works as the vice president of the Animal Wellness Group, which is affiliated with the E.T. Horn Company, a supplier, manufacturer and marketer of specialty ingredient products.

Bobby Brett (’73, Physical Education)
Brett works with his brothers to provide affordable entertainment for the community as owners of the Rancho Cucamonga Quakes and the Tri-City Dust Devils baseball teams, as well as the Spokane Chiefs, a member of the Western Hockey League. Brett and his teams provide financial support for multiple charities, including the Children’s Miracle Network, Boys & Girls Clubs, the Rypien Foundation and Catholic Charities.

Dean Conklin (’78, Behavior Science; ’84, MA Education)
As a teacher, Conklin sought to create a nurturing school environment, and now as superintendent for the Walnut Valley Unified School District, he has helped develop a “Culture of Care and Respect.” Under his direction, many schools have received Golden Bell awards, and some have moved out of “program improvement” status. Conklin is also helping Cal Poly Pomona establish a doctoral program in education.

Michael Ferguson (’73, History)
Ferguson began serving his community many years ago as a young paperboy for the Progress Bulletin. Today, he continues to serve the community as CEO of the Stephens Media Group, a national newspaper publishing company. Ferguson is also involved in numerous organizations such as the American Red Cross, Rotary International and the Los Angeles County Fair Association.

Michele Gendreau (’83, Hotel and Restaurant Management)
Keeping the masses happy by planning new menu items is one Gendreau’s responsibilities as director of food and beverage at the Disneyland theme parks. She also ensures that food quality standards are uniform at every restaurant in the parks. Previous positions include associate director and director of dining services for Spartan Shops Inc. at San Jose State University, and manager of dining services at USC.

Charles Hewitt (’80, Biology)
Hewitt co-headed a team that made medical history as the first to transplant limbs using the drug cyclosporine. In addition, his team also was the first to transplant skin grafts on burn patients using the same drug. Hewitt is one of the nation’s leading researchers of tissue transplanting and is a professor of surgery and chief of the division of surgical research at Robert Wood Johnson Medical School.

Lynne Lachenmyer (’80, Chemical Engineering)
As vice president of ExxonMobil Chemical, Lachenmyer manages the company’s global chemical business. She serves on the advisory board for ExxonMobil’s Women’s Economic Opportunity Initiative, which seeks to empower women in developing countries by giving them the tools they need to be financially successful and influence change in their communities.

Sanford Smith (’79, Architecture)
Smith is the recipient of the Global Innovators Award for Corporate Real Estate and the Environmental Leadership Award, which was presented by former Gov. Arnold Schwarzenegger. His career highlights include work on the South Campus project for Toyota Motor Sales in Torrance and Hoag Memorial Hospital Presbyterian. Both sites were built to be environmentally sustainable and receive Land Environment Economics and Development (LEED) certification.

Mahvash Yazdi (’74, Business Administration)
Chief Information Officer (CIO) Mahvash Yazdi received the 2010 Intelligent Utility Knowledge, Innovation, Technology and Excellence Award for CIO of the Year for her work at Southern California Edison. Under her leadership, Edison was named by Computerworld magazine as one of the top 100 places to work in IT. Yazdi was influential in creating the Edison International Team Computing Lab for the university’s College of Business Administration.