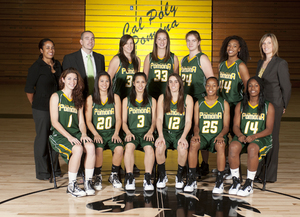 The Broncos will host the eight-team field, with the first-round games being played on Friday, March 11. This marks the 12th time in program history that CPP has hosted the West Region Tournament, with the last occurrence coming during the 2001-02 campaign.

In the opening round, the host Broncos will challenge Cal State San Bernardino at 7:30 p.m. in Kellogg Gym. Grand Canyon, the top squad out of the Pacific West Conference, received the No. 2 seed. Out of the Great Northwest Athletic Conference (GNAC), Western Washington stands at No. 4. The Otters of CSUMB hold the third seed.

“We’re definitely humbled to receive this opportunity and that the same time, we’re totally excited,” Broncos’ head coach Danelle Bishop said. “These girls have worked really hard and they deserve this tremendous honor. Certainly going up against the Coyotes will be a great matchup for both teams since we know each other so well.”

The Broncos defeated CSUMB Saturday, 59-53, to capture the California Collegiate Athletic Association (CCAA) crown. Megan Ford earned selection as the Most Outstanding Player of the week’s event, while Reyana Colson earned a spot on the All-Tournament Team. In program history, the Broncos’ most recent CCAA regular season title came in 2001-02 and the team’s last CCAA tournament title occurred in the 1997-98 season.

More details will be available on the Bronco Athletics website.