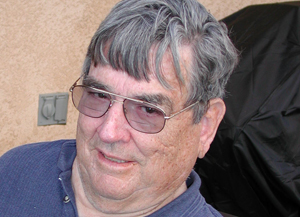 The university community is invited to honor the life and accomplishments of Bruce Hillam, former chair of the Academic Senate and one of the founding members of the computer science department, who died in late December at 65. The campus remembrance will be on Thursday, March 10, at noon in the Bronco Student Center’s Ursa Major A.
The event will fondly reflect on his career and look forward to the future successes of the institutions he helped build and improve. Drinks and refreshments will be served.

Hillam, who received his emeritus award in 2003, joined the mathematics department at Cal Poly Pomona in 1973 after receiving his doctorate in math from UC Riverside. During the late 70s, he was one of the first professors to teach computer science courses. Computer science officially formed a department a few years later in 1981, and Hillam served as chair from 1982 to 1992. He chaired the Academic Senate from 1993 to 1995, and he retired from teaching in 2008.
Hillam, who became a quadriplegic from a diving accident at 16, was a strong proponent of accessibility.
“He insisted that everything should be ADA compliant, and he was always talking to administrators to make sure it happened,” says Mandayam Srinivas, interim dean of the College of Science and computer science professor.