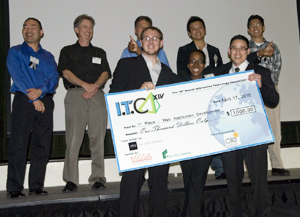 When Jeff Standard entered a student-run competition his senior year at Cal Poly Pomona, his only goal was to win first place so he could have bragging rights with his friends.

Little did Standard (computer information systems, ’04) know that the competition set his career on the right track.

In the Information Technology Competition (ITC), a yearly event overseen by student organization, Management Information Systems Student Association (MISSA), professionals write a case study exploring a problem in IT. For up to two weeks, competitors work in teams to devise a solution that will be presented to a panel of judges, all of whom work in industry.

As Standard and his team were presenting, Craig Navin was scribbling notes in the audience. Standard did not know it at the time but Navin was an executive from Pacific Alternative Asset Management Company, one of the country’s largest hedge fund firms for pensions and institutional investors. Navin approached Standard as soon as him team finished presenting.

“He said ‘Let’s go get lunch,'” Standard says. “As soon as we get in line for the buffet table he was asking me questions about my work history and my IT expertise. By the time we got to the end of the line, he asked for my resume and we agreed to meet later.”

Standard didn’t win first place – his team came in second – but he left the competition with something more valuable. He interviewed with the company a week later, and by the time Standard walked on stage for commencement he had a job as a programmer analyst for the hedge fund firm.

“Reflecting back on my career, this competition really set me up for success,” says Standard, who is director of business development for startup company Smartvark. “For one, it was a great paying job right out of school, I got really broad exposure of the financial markets and it challenged my IT skills.”

Year after year, there are many stories of students who were introduced to potential employers at ITC. Even when the economy took a hit, ITC competitors were still finding jobs, event organizers say.

“Employers see ITC as great opportunity to have access to top talent,” says Annie Kwok, MISSA’s ITC co-chair. “Instead of seeing a resume, employers get to see students’ talent in action. All of the qualities that make a successful employee — IT skills, problem solving and communications skills – can be seen at the competition.”

This year’s competition on April 16 is open to all college students. Teams can register online by March 30 and compete in one of five categories: business systems analysis, computer forensics, computer programming, web applications development and telecommunications. First place teams in each category will receive a $1,000 cash prize while second and third place teams receive $500 and $250, respectively.

General admission tickets are available online for non-competitors and include complimentary breakfast and lunch. Prices are $15 for students and $20 for CPP faculty, staff and community members. Ticket prices increase by $5 for those who do not register for tickets online.

The top sponsors of this year’s ITC are Hitachi Consulting, Cie Studios and Information Systems Audit and Control Association as well as KPMG andLunarPages.com.