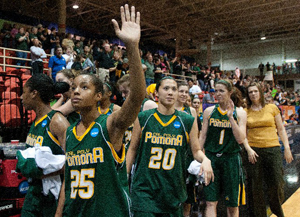 The remarkable 2010-11 season of the women’s basketball team came to an abrupt halt Tuesday, as the Broncos fell to Northwest Missouri State, 78-65, in the quarterfinal round of the NCAA Division II postseason.

The CPP squad finishes with an overall mark of 28-5, while the Bearcats will move on to face Michigan Tech in semifinal action Wednesday.

The Broncos outscored and outplayed Northwest in the second period but a 39-22 deficit at halftime proved to be too big of a hole for CPP to climb out of.

Joining Colson in the senior class was La’kenya Simon West, who also contributed a tremendous amount to the Broncos’ terrific postseason run during the 2010-11 campaign.

“With this team I knew that we had it in us from day one,” Semenero said, “because I knew Reyana was going to take us as far as she could. We hadn’t reached the Elite Eight in nine years. We fought hard, but like they said, we always were a second half team, and finally it caught up to us.”

To start Tuesday’s action, Northwest stormed out to an 8-0 lead behind the strong three-point shooting of Shelly Martin, who hit her first four long-distance attempts of the contest. The near-capacity crowd, with the majority in support of the Bearcats, rose to their feet through the hot Northwest start.

That spurt didn’t faze the Broncos though, as CPP picked up its energy on the offensive glass and stayed active on the defensive end. The combination of those two factors led to additional opportunities for the Broncos’ offense. CPP rallied to cut the advantage to 11-10 at the 12:43 mark following a three-point play from Colson on a layup and foul.

Northwest managed to push out once again, stretching its lead into double digits at 26-13 following a couple of an impressive moves on the fastbreak by Gabby Curtis. The largest lead of the half for the Bearcats came at 2:59 when Gentry Dietz hit a free throw to make the score 35-17. Northwest took a 39-22 margin into intermission.

To open up the second half, Semenero struck from three-point range on the right side. Full-court pressure from the Broncos led to a Northwest turnover and with the resulting possession, Charlene Popoff drove into the paint, sunk a layup and drew contact. Then, she hit the subsequent free throw. That cut the Bearcats’ lead to 39-28.

After another Northwest turnover, Megan Ford hit a jumper on the left corner of the paint to bring the advantage down to single digits.

The Bearcats’ lead swung around the 10-point mark across the next few minutes. With the shot clock winding down at 13:45, Semenero hit a running jumper over the outstretched arms of Northwest 6-foot-5 center Kyla Roehrig to bring the score to 48-40 in favor of the Bearcats.

Martin struck again for Northwest though on the next possession, nailing a trey from the right side to give her squad an 11-point edge. Moments later, Curtis fired in a three-pointer for the 54-40 lead.

The Broncos continued to work, with Semenero dropping a trey in from the right corner at the 9:36 mark to trim the margin back to single digits, 58-49.

The Bearcats continued to hit their free throws and late attempts from CPP landed just off the mark, leaving Northwest to advance into the Final Four.