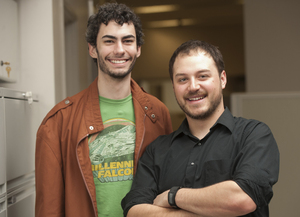 Portraying mountain climbers stranded on top of K2, theatre majors Robert Shields and William Dinwiddie must put on the show of their college careers at a competition this week.

They’ll have a small set, wear heavy winter coats and even carry an authentic ice ax. But with only three minutes to perform and stiff competition for the $5,000 scholarship, it’ll be a tough climb to the top.

“Three minutes is such a tiny amount of time to show the judges everything we have,” says Shields, who portrayed Hamlet at the Southern California Shakespeare Festival at Cal Poly Pomona in the fall. “We’ve got high hopes, and we’re working our butts off. We want to win.”

This is the third year that Cal Poly Pomona students have been nominated to perform at the Kennedy Center American College Theater Festival’s regional competition, which will be held in Los Angeles on Feb. 8-12. Nine students will compete for the Irene Ryan Acting Award, which includes a $5,000 scholarship for the winner. The event draws from Central and Southern California, Arizona, Hawaii, Southern Nevada and Utah.

The theatre department will also set up and perform “Betrayal,” which includes four actors, nearly 20 crew members and several faculty. 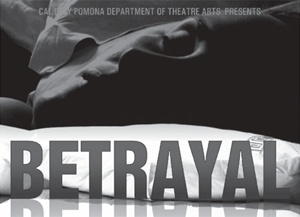 “Our students deserve the opportunity to perform ‘Betrayal’ at the 2011 Kennedy Center American College Theatre Festival,” says theatre Professor and Chair Julian White. “Our theatre department has been a participating member of the festival for the last three years, after a 30-year absence. They’ve worked extremely hard, not only on this show but on their craft.”

The large proportion of Cal Poly Pomona students (nine of 43) nominated to the regional competition speaks volumes about the theatre department’s talent and hard work, Shields says. In addition, “Betrayal” is one of only 10 plays that will be judged.

“Our sheer numbers show that we have steady improvement. We’re doing well, and we’re doing better,” Shields says. “That’s due to the tremendous help we get from the faculty. They’re constantly pushing us to do better.”

Winners of the regional festival may move on to the national competition, which will be held in mid-April at the Kennedy Center in Washington, D.C.