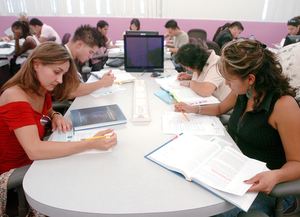 Cal Poly Pomona employs many techniques to gauge how its students perform — the most important being the professor’s assessment in the classroom. Career success is another barometer, and data show that Cal Poly Pomona students rank near the top in both median starting salary and median mid-career salary.

The test provides “a means for measuring an institution’s contribution to the development of key higher order competencies,” says the Council for Aid to Education, a national nonprofit organization that devised the CLA and whose mission statement includes “improving quality and access in higher education.”

The CLA has been in the news recently because of a new book by professors Richard Arum and Josipa Roksa, “Academically Adrift: Limited Learning on College Campuses,” which used CLA data to allege that nearly half of college students are not developing sufficient critical thinking skills by the time they graduate.

Cal Poly Pomona participated in a longitudinal test, in which the same group of students took the CLA as entering freshmen in 2005, as sophomores in spring 2007, and again as seniors in 2009. Based on the CLA’s analysis of the results, which factor in both a raw score of improvement and the test takers’ intellectual ability, the students improved at a pace “expected at an institution with students of similar academic abilities.”

Of the 18 CSUs which reported CLA results, Cal Poly Pomona freshmen who took the test had the highest SAT scores, and they were in the top quarter among seniors who took the test. (The other CSUs participated in a cross-sectional test, in which different groups of students took the CLA as freshmen and as seniors.)

“Although the CLA is just one indicator of ability, we’re pleased that it underscores what we already know: Cal Poly Pomona students are among the highest achievers entering the CSU, and they leave the same way,” says university President Michael Ortiz.

(Photo: Students work on their final exam in a strategic management class in 2006.)