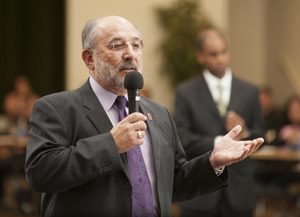 Uncertainties about the state budget and the impact on Cal Poly Pomona, as well as the proposal to convert to the semester system, dominated the discussion at the Feb. 8 Pizza with the Presidents.

Although one of the first questions, “Will the CSU budget return to normal?”, was met with laughter from throughout the room, President Ortiz’s responses about the economy, taxes and the possibility of more cuts to the CSU were serious, sometimes grim.

“We don’t know how severe things are going to get,” said Ortiz, describing the situation as “whitewater budgeting.”

The president was careful not to make promises or give specifics about what steps Cal Poly Pomona might take to manage a potential $25 million cut, which he described as the “best-case scenario.”

“Everything is on the table – and that means everything,” he said to about 200 students in the Bronco Student Center’s Ursa Major suite.

Provost Marten denBoer echoed the sense of uncertainty, and added that the CSU system’s “intent is not to raise tuition fees additionally this year if we’re not facing another [budget] reduction.”

If tuition fees are again increased, one-third of the hike will go toward financial aid to help offset the costs for students most in need. 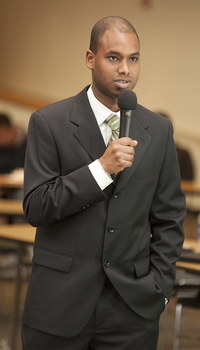 The biggest unknown is whether current, temporary income, sales and car tax rates will be extended. They are scheduled to expire unless voters approve them in June, and it is uncertain whether the matter will even make the ballot. If the tax rates are not extended, the state would face an additional $10 billion deficit, which translates into an overall $1 billion cut to the CSU, twice the current amount. Gov. Jerry Brown’s proposed budget, released in January, calls for a $500 million cut to the CSU.

Conversion from quarters to semesters – a proposal being studied at Cal Poly Pomona and five other universities in the CSU system – was the other major topic. The Academic Senate is looking at the matter now and will make its recommendation to Ortiz.

ASI President Ismael Souley said ASI would heed the results of a student poll and oppose the conversion.

The provost, who acknowledged that he supports the conversion, said the national trend is toward a semester system, noting that fewer than 10 percent of universities still operate on quarters. Faculty sabbaticals and study abroad opportunities are usually aligned with semester calendar, and transfer students from community colleges would have an easier time transferring their courses to Cal Poly Pomona. denBoer also cited the academic challenges of a quarter system.

“In many areas, 10 weeks is not enough time” and instructor feedback, especially in writing-intensive courses, is more difficult. 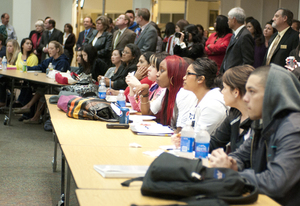 He said cost savings are not a major driver of the discussion. “We might save a little in the long run, but that’s not the reason to consider switching. … The goal is to improve academic quality.”

He said that if conversion were approved, the process would take at least three years and students currently studying in the quarter system would not find their graduation plans delayed.

One student raised concerns about the higher cost of on-campus food compared with off-campus restaurants and stores. Brett Roth, director of Foundation Dining Services, explained that on-campus food prices strive to be competitive. However, on-campus outlets do not have the same volume of business as off-campus outlets, which requires prices to be adjusted, he said.