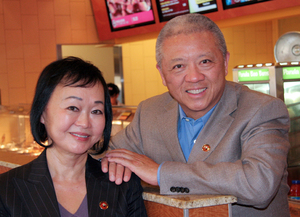 Longtime Cal Poly Pomona supporters and Panda Restaurant Group founders Andrew and Peggy Cherng have pledged $2.5 million to The Collins College of Hospitality Management – a pledge that will launch a significant expansion of the college.

“The students at Cal Poly Pomona are very close to our heart,” Andrew Cherng says. “In many ways, they are like us – first-generation and focused on making a difference. Both Peggy and I are proud to give these young men and women a greater opportunity than was available to us.”

The pledge, matched by the college’s benefactors and namesakes, Carol and Jim Collins, paves the way for construction of a $10 million educational complex that will include classrooms and study spaces specifically for the college’s new masters program.

“Andrew and Peggy have demonstrated their commitment to the university many times throughout the years,” says Andy Feinstein, dean of the Collins College. “They were instrumental in refurbishing our student-operated restaurant kitchen, and their gifts built the Panda Express Classroom. This pledge will add to their legacy.”

The Cherngs’ ties to Cal Poly Pomona run deep. Andrew Cherng is chairman of the steering committee for the university’s comprehensive campaign, which publicly launched last fall and is well on its way toward raising $150 million. In 2009, Peggy Cherng received the Community Leader of the Year Award presented at the Asian & Pacific Islander Student Center’s Academic & Community Excellence dinner.

The Cherngs have both served as guest lecturers, and in 2008 Andrew received an honorary doctorate from the California State University and Cal Poly Pomona.

Panda Restaurant Group began in 1973 when Andrew and his father, Master Chef Ming Tsai Cherng, combined their talents to open Panda Inn in Pasadena. The menu introduced an array of new flavors to Southern California cuisine. Andrew again broke ground in the restaurant industry by providing gourmet recipes in a quick-service environment with the launch of Panda Express in 1983. Hibachi-San is a quick-service restaurant featuring Japanese grill favorites that launched in 1992.

Under the leadership of the Cherngs, PRG has grown to become the largest Chinese foodservice provider in the nation, with close to 1,400 restaurants in 38 states and Puerto Rico and with annual revenues expected to exceed $1.5 billion in 2011.

“The Cherngs are the quintessential American success story,” university President Michael Ortiz says. “Their pledge will help ensure that Collins College students will be able to pursue their own dreams. They are true difference-makers.”