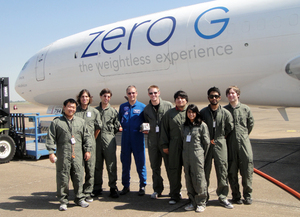 Incredible speed and pressure, then weightlessness.

Over and over, about 40 times in two hours, they flew up and down like a rollercoaster over the Gulf of Mexico near Houston. For the nine aerospace engineers, freefalling on a special NASA Boeing 727 airplane for a NASA-sponsored experiment was the time of their lives.

NASA’s Johnson Space Center hosted 16 research teams from around the country to test their respective technologies in a near zero-gravity environment in late September and early October through its Facilitated Access to the Space Environment for Technology (FAST) program. The Cal Poly Pomona group, composed of eight students and Professor Don Edberg, was the only undergraduate team among the groups of university researchers, private businesses and NASA scientists.

For their eXMAC (Experimental Methods in Attitude Control) project, Cal Poly Pomona students brought a mini satellite they built from scratch to test the effectiveness of its motion-sensing and control system in the zero-gravity-like conditions. During each 17- to 25-second period of weightlessness, the satellite wirelessly transmitted its critical performance measurements to a laptop. The satellite was programmed to use its control system to eliminate any tumbling motion and maintain its pointing direction in space.

Aerospace engineering Professor Don Edberg says the sensation wasn’t quite like falling but was “definitely groundless.”

Kyle Mathews, the team’s leader and a senior, says Cal Poly Pomona’s team was chosen to participate in FAST in part because their satellite was built with inexpensive parts.

After the trip, students analyzed the data, worked on improvements and submitted a proposal for another NASA zero-gravity flight. Their proposal was accepted and the team will again travel to Houston in April.

The eXMAC project coincides with the launch of a new laboratory within the aerospace engineering department, allowing students to experiment with and carry out research on new ideas for spacecraft, launch vehicles and high-altitude balloons.