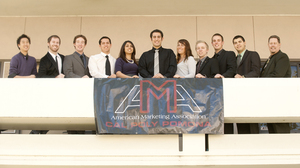 The students’ marketing plan, which involved primary research, advanced financial calculations and some creativity, received an honorable mention from American Marketing Association’s annual case competition. The students will be recognized for their work in March at the association’s International Collegiate Conference in New Orleans.

“This accomplishment shows that if you put your heart into something it will pay off,” says marketing student Justin Rezvani, who also serves as president of the Cal Poly Pomona chapter of AMA.

This is the first time in recent memory that Cal Poly Pomona students have entered an AMA case competition. Not only did the 13 students perform well in their first attempt but they are the only students from a California university to be honored. Other schools to receive recognition include Carnegie Mellon University, University of Maryland and University of Nevada, Las Vegas.

Every group that competed had to devise a unique way promote Nintendo’s line of products to populations that typically do not play video games. Cal Poly Pomona students focused on recent retirees who are active in fraternal and social groups such as the American Legion. The marketing plan calls for a street team composed of 60-year-olds who would donate Wii consoles and Nintendo DS handheld players to select lodges. Once street team members teach retirees how to use the devices, they would establish Wii competitions with cash prizes.

By introducing new technology in a familiar environment, recent retirees would have new ways to exercise, socially interact with other lodge members and connect with their grandchildren.

“This project wasn’t just about the competition or the grade,” Fares says. “Everyone has a true passion for marketing. For most of us, this is what we genuinely want to do with our lives.”

“We know our students, if given the opportunity, can compete with the very best,” Lapidus says. “CBA is proud of its student organizations as it provides excellent opportunities to apply skills learned in the classroom to real world scenarios.”