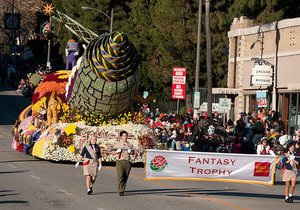 The Cal Poly Universities’ Rose float teams were over the moon after their float, Galactic Expedition, earned its third consecutive Viewers’ Choice Award from the Tournament of Roses Parade. Earlier on New Year’s Day, the Cal Poly Universities’
latest and 63rd consecutive float had already won the Fantasy Trophy for most
outstanding display of fantasy and imagination. 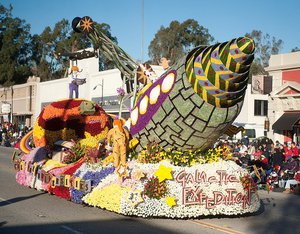 Galactic Expedition depicts a planet and a rocket floating amid
clouds as children work to assemble the spaceship of their dreams. The
2011 parade theme is “Building Dreams, Friendships and Memories.”
Michael Roussin, a third-year mechanical engineering student from Cal
Poly Pomona, submitted the winning design in the annual design contest.

In the last few days leading up to the parade, volunteers covered the
float with thousands of roses and carnations, as well eucalyptus and
oleander leaves. Rose Float team members at Cal Poly Pomona and Cal Poly
San Luis Obispo have worked year round on every aspect of the project
including its design, construction, animation and decoration. Before
heading down Colorado Boulevard, they will check and double check to
make sure the animation, mechanics and other operating systems are in
good working order.

To view more images from the parade, visit the university’s official Facebook page at www.facebook.com/calpolypomona.