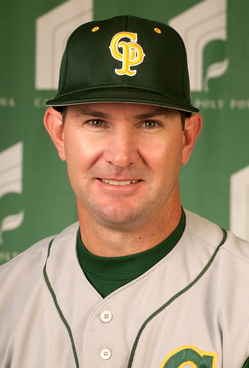 Betten, who served as an assistant at UC Riverside for the past six seasons, becomes the fifth head coach in the 51-year history of the CPP program.

“Cal Poly Pomona is particularly fortunate to have a storied history with our baseball program,” said Doug Freer, vice president for student affairs. “I am pleased and look forward to Coach Betten’s leadership of our program going forward. During the interview process, it became apparent he was the right choice, bringing to our program the best balance of enthusiasm, pure baseball instincts, a solid relationship with the Southern California baseball community, and was strongly supported by our student-athletes.”

After the August retirement announcement of Mike Ashman, who compiled a 358-419-4 overall record during his 15 years as the Broncos’ head coach, a nationwide search was conducted. Betten proved himself as a dynamic leader and a rising talent in the coaching community.

Betten assumes control of a squad that went 26-27 overall in 2010, including an 18-22 mark within the California Collegiate Athletic Association. The CPP team last made the CCAA Tournament in 2005 and the program’s most recent appearance in the NCAA Tournament came in 1993. The Broncos captured Division II titles in 1976, 1980 and 1983.

Jimmy Ramos, who had served as interim head coach since Ashman’s departure, will remain on staff as an assistant to Betten.

“I’d like to thank President [J. Michael] Ortiz, Dr. Freer, Brian Swanson and the entire administration at Cal Poly Pomona for selecting me to carry on the tradition within the baseball program here at Cal Poly Pomona,” Betten said. “My goal is to energize the local baseball community and recruit quality student athletes that have the willingness to compete on the field and in the classroom. By focusing on these goals, we will create a culture of success within the Bronco baseball program. “

After joining the UCR staff in September of 2004, Betten helped guide the Highlanders to the Big West Conference title in 2007 as the squad was ranked as high as 13th in the nation during the year. That championship marked the first time in 20 years that a Division I program in the UC system won its conference championship outright.

Before becoming part of the UCR program, Betten served as an assistant for Cal Baptist in 2004, when the Lancers overcame a slow start to post a 30-22 record and finished as runners-up in the Region II Tournament.

Prior to his time with the Lancers, Betten served as an assistant on the staff at Riverside Community College from 1996 to 2003. He was the head assistant when the Tigers won three straight California Community College state championships from 2000 to 2002.

Throughout his coaching career, Betten has had 40 position players either drafted or signed to professional contracts.

“I have learned many important lessons that have helped me develop into the coach and person I am today,” Betten said. “The most important lesson is to be an advocate for the student-athlete. Also understanding there is a process when helping young student athletes develop on and off the field. And finally, along my coaching career I have realized the importance of surrounding myself with good people.”

Betten played professionally for six years after being taken in the 26th round by the California Angels in the 1995 draft. He reached as high as the AAA level with the Angels’ teams in Vancouver and Edmonton in 1998 and 1999. He began his coaching career in 2000 with the Angels Midwest League affiliate, Cedar Rapids.

A graduate of New Life Christian High School in Highland, Calif., Betten began his college career at RCC, earning All-American, All-Southern California and All-Orange Empire Conference honors for Coach Rogers in 1992 and 1993. He then earned a scholarship to Arizona State. Playing for Coach Jim Brock, Betten was part of a team that finished third in the 1994 College World Series. In 1995, Betten earned All-Pacific 10 Conference first team honors. He also served as a team captain.

“We are excited about the hiring of Coach Betten and his plans for the direction of Bronco baseball,” Swanson said. “His track record of success is remarkable, before as a player and now as a coach, and that is what our student-athletes and program aspire to be. His recruiting relationships will be invaluable as we move forward.”

Betten earned a bachelor’s degree in sociology from Thomas Edison State College in 1998. He also earned a master’s degree in physical education from Azusa Pacific in 2002.