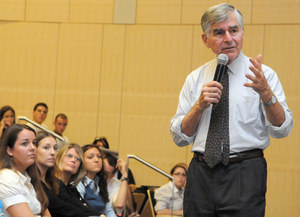 Michael Dukakis, the 1988 Democratic presidential nominee and former Massachusetts governor, will speak about “Public Service, A Great Career” on Tuesday, Feb. 1 at 3 p.m. in the Bronco Student Center’s Ursa Major room. The event is free and open to the public.

Dukakis’ speech, sponsored by the dean of the College of Letters, Arts & Social Sciences and organized by the Department of Political Science and Master of Public Administration, is intended to stimulate discussion about the importance of public service, says James Kim, an assistant professor of political science.

Now a Distinguished Professor of Political Science at Northeastern University in Boston, Dukakis has long been an advocate for public service, a path he followed in 1962 when he was elected to the Massachusetts Legislature. His career led him to the governorship in 1974 and a run for the presidency in 1988, when he lost to George H.W. Bush in a bitterly contested campaign.

“I can bring to a classroom a wealth of information, because I have been there,” Dukakis told CNN. “I encourage all of my students to nurture their love of public service, but I tell them if they want to run for president to talk to me first.”

Public transportation is another of Dukakis’ passions. He served as a member of the Board of Directors of Amtrak, The National Railroad Passenger Corporation, from 1998 to 2003 and has long spoke of the benefits of subways, buses and commuter rail. He plans to take the Metrolink and a bus to get from Los Angeles to campus on Feb. 1.