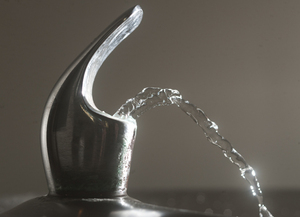 The university will be pumping and filtering its own water following the construction of a $2.4 million water filtration plant on campus. The facility, funded by a Department of Public Health grant, will filter local well water into potable water, reducing the campus’ reliance on the Metropolitan Water District (MWD), which imports water from Northern California and the Colorado River. Construction is expected to start in mid-March and be completed at the end of 2012.

“We recognize that living in the arid climate region of Southern California, our reliance on imported water from Metropolitan Water District is not sustainable,” says George Lwin, manager of energy services.

The campus pumps water from four wells, two of which irrigate farmland, fields and landscaping. Water from a third well is blended with MWD purchased water – about $160,000 or about 65 million gallons annually – and circulated to the sinks, faucets, fountains, bathrooms and kitchens throughout campus.

“This plant will allow us to filter our well water and get us away from having to rely on MWD,” adds Walter Marquez, director of facilities administrative & energy services.

The equipment employs reverse osmosis and filters out undesirable things such as nitrates, perchlorates and TDS (total dissolved solids) that are present in groundwater. It’s the same process that commercial bottlers use, although bottling Cal Poly Pomona water isn’t on the horizon, Lwin says.

The 4,300-square-foot building will be located among a grove of trees on Eucalyptus Lane, just west of Red Gum Lane (across the street from the parking booth on Kellogg Drive). The public health department grant is supported by the voter-approved Proposition 84, the safe drinking water, water quality and supply, flood control, river and coastal protection bond act of 2006.