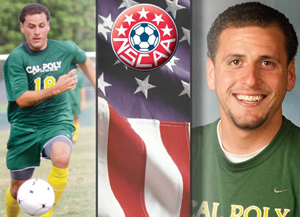 “It’s an exciting honor,” Gonzalez said. “I’m already starting to focus on next season and our whole team is just hungry to get better. We want to be prepared for 2011 and as a senior, it’s going to be an important season for me.”

Gonzalez is just the second player in the 27-year history of the Broncos’ men’s soccer program to receive the honor. Trevor Persson, who currently serves as a program associate in helping head coach Lance Thompson, garnered the accolade in 2000.

“This is another well-deserved honor for Luis,” Thompson said. “He had a great season and I’m very happy for him. He came up with crucial goals and assists for us all season long.”

Monday brought the highest honor of all, a spot on the NSCAA All-American Third Team as one of the top 12 forwards at the Division II level.

Gonzalez led the California Collegiate Athletic Association in points during the regular season with 33 on 12 goals and nine assists. Arguably the most balanced player in the league, Gonzalez’s goal total was tied for first in the conference and his assist mark ranked second.

In probably the top individual performance of the year, Gonzalez set the new single-game CCAA record for points with 10 against Cal State East Bay on Oct. 24. On that day, he registered four goals and two assists. Earlier this month, he was named to the All-CCAA First Team.

A transfer from Cerritos College, Gonzalez was named the 2009 National Soccer Coaches Association of America (NSCAA) National Player of the Year at that level.