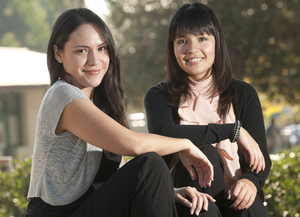 The company had never launched a comprehensive marketing campaign for the Spanish-language market despite an estimated 50 million Hispanics living in the United States who are projected to have a purchasing power of $1 trillion by 2013. Scotts wanted to reach this lucrative market, and one of the company’s first moves was to hire two Cal Poly Pomona business majors as interns.

Diana Camacho and Jenny Toribio, who are both bilingual, first learned about the Scotts internship at the Career Center job fair last spring. They were looking for a challenging internship to add to their resumes, and their time at Scotts was a meaningful experience.

“I was truly fascinated with some of the projects that they had me work on over the summer,” says Toribio, who is studying accounting. “Over time, I became invested in the projects and wanted to see everything we could do to tap into the Hispanic market.”

During the work week, Camacho and Toribio spent 20 hours in the Scotts office interacting with the team, conducting data analysis and researching demographics of U.S. Hispanics. They also worked with Grupo Gallegos – a high-powered advertising agency that caters to the Hispanic market – and conducted focus groups to better learn the preferences of Hispanic consumers. Another 20 hours was spent on weekends interacting with consumers, such as promoting Scotts’ products at Chivas USA soccer events and surveying customers at garden and hardware stores.

Scotts executives could have approached universities closer to their Irvine office, but they selected Cal Poly Pomona thanks to alumnus John Kondo, ’96, economics. Kondo, the customer marketing manager and corporate liaison for the Western region, advocated for recruiting at his alma mater.

“I learned a lot from some really good professors and had such a good experience,” says Kondo, who minored in marketing. “I told myself that if I ever had the chance, I would go back to Cal Poly Pomona and use it as a school for recruiting.”

Camacho and Toribio offered a fresh perspective to Scotts using both their business talents and cultural heritage, executives say. In fact, some of the their recommendations may soon be implemented.

Camacho and Toribio, for instance, noted that Spanish-language promotional brochures, fliers and banners offered in stores were often word-for-word translations of English-language materials. That type of translation allowed for grammatical errors and employed words that have different meanings in various Latin American cultures. Camacho, who is studying international business and marketing, created promotional pieces whose design, information and taglines would resonate more closely with Hispanic consumers.

Gittere plans to have an outside agency refine Camacho’s ideas and expects see those materials appear in stores next spring. Camacho and Toribio also recommended that Scotts implement a street team to build brand awareness and to offer how-to gardening videos — featuring Scotts products — on YouTube.

“I am pleased just to know that Diana and I had something that was valuable to a company and we could contribute,” Toribio says. “I grew a lot from this experience and I want to see them prosper as well.”

Other companies interested in learning about internship programs for business students can contact Marguerite Endres, CBA coordinator for internships and alumni relations at mapardington@cpp.edu or (909) 869-2315.