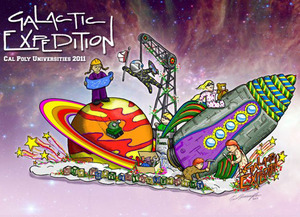 The Cal Poly Universities will share their rose float with the world on New Year’s Day, but the campus community can get a sneak preview of “Galactic Expedition” on Thursday, Dec. 2.

The annual Rose Day event is a chance for people to see the hard work that the rose float team has put in to bring the float concept to life, says Sergio Hernandez, a student involvement intern at the Office of Student Life & Cultural Centers.

“They will see what the float looks like before the final decoration,” Hernandez says. “In some ways it’s more impressive because you can see all the steel and rubber and the engineering that went into it.”

The float will be on display in University Park, near the library, from 11:30 a.m. to 1 p.m. for the carnival-like event, which will include food, games, prizes and a deejay. Education – in a fun atmosphere – is also on the agenda, Hernandez says.

Volunteers will show and explain how the float is designed and built, and photos of all 62 previous entries will be on display. “We have a rich history and we want to highlight it,” Hernandez says.

Students who wish to put their own imprint on the float may volunteer to help decorate it during Deco Week, Dec. 26-31 in Pasadena.

“Galactic Expedition” illustrates the parade theme “Building Dreams, Friendships and Memories” with its depiction of a planet and a rocket floating on clouds as children work together to assemble the spaceship of their dreams. Michael Roussin, a third-year mechanical engineering student from Cal Poly Pomona, submitted the winning design in the annual design contest.

The Cal Poly Universities made history at this year’s parade when their float, “Jungle Cuts,” won two major honors: the Bob Hope Humor Trophy and the Viewers’ Choice Award, which is decided by an online vote of fans. The universities will go for their third consecutive Viewers’ Choice Award in 2011. Voting can be done online and via text, with a maximum of five votes each per email address and phone. More information about the voting process will be available soon.