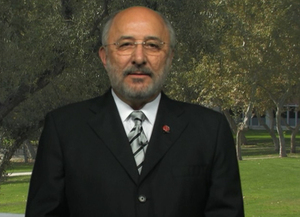 President Ortiz takes on a serious note in this week’s video message as he speaks on the student who reported an attack and rape, and the interim suspension of the Pi Kappa Alpha fraternity.

“Cal Poly Pomona has a zero tolerance policy in place on violence and hazing. We will not let the actions of a handful of people harm this university,” Ortiz says. “If you believe faculty, staff or students are being bullied or intimidated, let someone know — immediately. Don’t be afraid to speak out.”

University Police are seeking help from anyone who may have witnessed or have knowledge about the attack, which occurred at night on Oct. 20 on Temple Avenue, near University Drive. Any suspicious activity should be reported to the police by dialing (909) 869-3070 or using a Code Blue Box.

Allegations against Pi Kappa Alpha include the blindfolding and branding of select members in December. The fraternity has been ordered to suspend all activities, and the 31 other Greek organizations on campus will be placed on temporary probation. Each chapter will undergo a comprehensive hazing audit.

Later in the video message, the president shares details about exciting events this week. The university will host a gala event to launch the $150 million Campaign for Cal Poly Pomona for influential supporters and alumni. The event will be held on Friday, Nov. 5 at the historic stables.

Also on Thursday, the campus celebrates the Dia de los Muertos — Day of the Dead — in Bronco Commons. The event begins at 6 p.m., and includes food, music, live performances and multicultural displays.