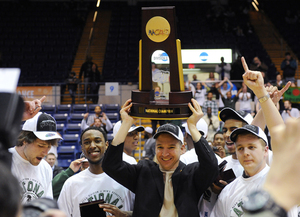 For the Cal Poly Pomona fans unable to make the cross-country trip to Durham, N.C., for Thursday’s exhibition game, there are a couple of ways to follow the action between the Broncos and Blue Devils.

On campus, a live video feed will be aired in the Center Court area of the Bronco Student Center. Tipoff is set for 4 p.m. on Thursday, Nov. 4. The viewing party is co-sponsored by the athletics department and Associated Students Incorporated.

To watch the game at home, go to GoDuke.com and sign up for the Inside Access package, which includes the live webcast for a $10 fee.

Cal Poly Pomona won the Division II championship last season with a 65-53 victory over Indiana (Pa.). Duke amassed a 35-5 record en route to capturing the Division I title with a 61-59 win over Butler in Indianapolis, Ind.

Entering the 2010-11 campaign, Duke earned the No. 1 spot in the USA Today/ESPN preseason coaches poll. The Broncos are ranked first in the Division II Bulletin preseason poll.