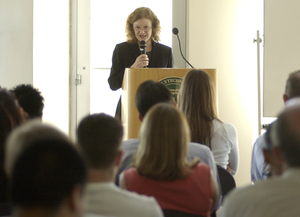 Although we live in a market-driven society, not everything should be for sale, including vital organs and toxic waste. That’s an argument philosopher Debra Satz will present at the 13th annual Southern California Philosophy Conference on Saturday, Nov. 6 at Cal Poly Pomona.

Satz, a philosophy professor at Stanford University and conference keynote speaker, recently published a book, “Why Some Things Should Not Be for Sale: The Moral Limits of Markets,” that debates the ethics of selling services such as prostitution, surrogacy and voluntary slavery.

“Philosophy is seen as old and archaic, but it’s a discipline that changes and evolves,” says Michael Cholbi, a Cal Poly Pomona philosophy professor. “If you want a condensed education of what modern-day philosophers are talking about, you’ll get it at this conference.”

The all-day event, which will be held at The Collins College of Hospitality Management, will include 12 presentations by philosophy scholars from Southern California universities, graduate students and authors. Topics include free will, death, slurs, miracles, and crime and punishment. Two sessions feature authors and critics discussing the author’s book.

Although the conference is regional, says Cholbi, the intellectual quality is at a national or international level. The conference, which was held at the Claremont Colleges in 2009, features scholars from UCLA, USC, CSU Long Beach and UC Riverside.

“You’ll get a good snapshot of what’s cutting edge in philosophy,” Cholbi says.

The free conference is sponsored by the College of Letters, Arts & Social Sciences and the Provost’s Office. All events are open to the campus community and public. Presentations begin at 9 a.m., and registration is at 8:30 a.m. A free lunch will be provided. Parking is free. For more details, visit www.class.cpp.edu/phl/newsevents/.

(Photo: Jennifer Radden of the University of Massachusetts, Boston, speaks at a conference at Cal Poly Pomona in 2004.)