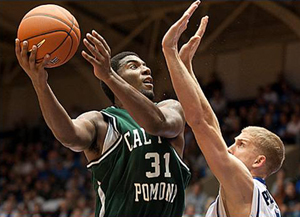 Under the watchful eyes of the Cameron Crazies, the Cal Poly Pomona men’s basketball team exhibited a spectacular blend of hustle and calmness. Much to the shock of the Durham home crowd, the Broncos trailed Duke by just six points at the end of the first half – 39 to 33.

The Blue Devils turned up the heat in the second half to capture a 81-60 exhibition win but the arrival of the Broncos on the national scene pushed to another level Thursday under the lights and in front of a capacity crowd of 9,314 fans.

“It starts with our seniors and their leadership,” Broncos’ head coach Greg Kamansky said. “We made the Duke players play hard and that’s what we wanted. Our guys came out with no fear and it showed.”

“We played against a very good team tonight,” legendary Blue Devils’ head coach Mike Krzyzewski said. “Those kids are very well-coached. They play hard. That’s one of the reasons why we wanted to play, and why we scheduled the Division II national champion from the year before… They have talent, they are unbelievably well-coached, they have great heart.”

CPP hushed the Cameron Indoor Stadium crowd off the tip, as Jahn grabbed a deflection and drove the lane for an easy layup to put the Broncos ahead 2-0. It ended up as the Broncos’ only lead but the visitors battled the Division I defending champion Duke squad as close as anyone could have imagined.

The Blue Devils built up a 14-point advantage midway through the opening half, but it didn’t faze the team from Pomona. The Broncos rallied to finish the period on a 9-2 run capped off with a three-point play from Jahn after a layup and a successful free throw.

The smothering defense of CPP held Singler to just two points in 19 minutes played during the first half. The Broncos grabbed an astounding 11 offensive rebounds en route to a 23-17 rebounding advantage in the opening 20 minutes.

The Blue Devils’ offense awoke in the second half, as Duke embarked on a 12-0 run between the 16:20 and 11:42 marks. Nolan Smith contributed six points in that stretch for the Blue Devils.

The Broncos never gave up – Duke stretched its lead to 31 with 7:51 left to play but solid free-throw shooting from CPP chipped away at the deficit enough that a 21-point margin flashed on the scoreboard at the final whistle.

In the 18 attempts from the strike, the Broncos hit 15 of the free throws. The Blue Devils on the other hand, went 17-28 in that category.

Senior Donnelle Booker put together a gritty performance while playing with an injured hand, as he tallied seven points, six rebounds and three blocks. His energy on the defensive end helped the Broncos hold Duke to 2-for-15 shooting from three-point range.

“The reality was that in the first half we played very strong,” Kamansky said. “In the second half, it was hard to stop Duke’s transition game because we turned the ball over too much. We were tired and I’d have to guess that they’ve got the best transition game in the country.”

With a large traveling party of CPP fans in attendance, the Broncos’ fans beamed with pride as the clock ran down. The defending national champion Cal Poly Pomona men’s basketball squad arrived in North Carolina ready to play and gave the best of D-I — the storied Duke Blue Devils — a tremendous game.