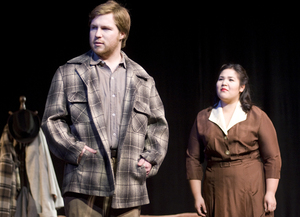 The theatre department will take on Harold Pinter’s “Betrayal” this fall. The play, which has only three major characters, will open Thursday, Oct. 28 at 8 p.m. and run through Nov. 6.

“Betrayal” focuses on the affair between a woman and her husband’s best friend. The play has mature themes and also mixes in sardonic humor. The three main characters — the wife, the husband and the best friend — build conflict through their continued secrecy.

The play is shown in reverse chronological order. “It is the deconstruction of a love affair: the first scene is the end of the affair, and the last scene is the beginning,” says director Robert Gilbert, theatre department emeritus.

Gilbert adds that the play doesn’t focus solely on the affair. “There is the obvious triangle: the husband, whose wife has an affair with his best friend, but there are about four or five other significant betrayals. One betrayal will inevitably cause other betrayals.”

(Photo: Devin Calderone and Krystine Martinez perform in the theatre department’s production of “A View from the Bridge” on Feb. 4, 2009.)