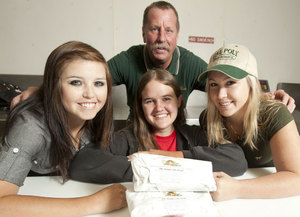 When challenged to create a sausage that represents Cal Poly Pomona, students knew it had burst with flavors and shine with green and gold. However, finding a way for the school colors to stand out in a cooked sausage was its own challenge.

They tested ingredients such as oregano, sage and cheddar cheese, but either the colors or the taste didn’t work. Eventually, parsley and the yellow seeds of crushed red peppers did the trick, providing flavor and the right colors even after the sausage was cooked.

“Broncowurst” was developed by agriculture students in Robert Karmann’s meat science & industry lab two years ago and perfected by subsequent classes. The flavor, Karmann says, is unlike any sausage on the market.

“It’s unique. The closest thing that it comes to is a hot bratwurst, but the cheese and the caraway seed throws it off to a whole other spectrum,” Karmann says. “It’s full of flavor.”

To prepare the sausage, students grind lean pork shoulder and mix it in various spices and ingredients, including parmesan cheese, white wine and caraway seeds. After two days of resting, the sausage is encased and linked by hand into 6-inch, bun length portions. 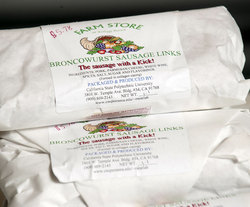 In February, a team of four students will enter Broncowurst in a collegiate competition at the National Meat Association’s convention. When students entered the contest two years ago, they were unofficially a handful of votes shy of first place. This year, they’re determined to win.

More than 100 people — friends, family, classmates, coworkers – have tasted the sausage and provided input. The team, which includes Jeannie Knuchell, Sarah Dick and Edwin Arriola, made final adjustments to the recipe this summer before offering it for sale.

“We made three test batches this summer, two pounds at a time,” Ball says. “Once we got it and nailed it down, we made about 75 pounds.”

Now that Broncowurst is for sale, Karmann expects to receive more feedback and will continue refining the flavors up until the February competition.

“The idea of selling the current product was to get feedback from people who are sausage lovers,” Karmann says. “Now that we’re selling it, we should get more definitive and constructive comments.”

Broncowurst is available for purchase at the Farm Store at Kellogg Ranch and at the Meat Lab (Building 34) for $5.25/pound. Students also plan to sell fresh sausage at the Pumpkin Festival, Oct. 16-17.