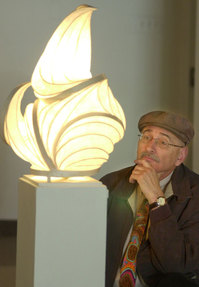 Longtime English Professor George Stavros, 73, died in his home in Pomona on Sept. 22.

Stavros, who worked at Cal Poly Pomona from 1971 to 2002, primarily taught romantic and Victorian literature. He received an Outstanding Advisor award for the College of Letters, Arts & Social Sciences and emeritus status in 2002. Stavros also served as chair of the English & foreign languages department from 1995 to 1997.

A memorial will be held on Oct. 23 at 6 p.m. at the dA Center for the Arts, 252 S. Main Street, Pomona. As a celebration of life, guests are encouraged to bring their favorite anecdote about George, a poem or a postcard to share at the gathering.

“I remember him as a really beloved, dedicated member of the department,” says Victor Okada, professor emeritus of English. “He was known as a teacher with rigorous but fair standards. He made time for his students and made significant contributions to the department.”

Okada says he recently received an email from an English alumnus.

“He learned so much about how to read poetry from Dr. Stavros. This was an undergraduate and graduate student from many years ago,” Okada says. “I think students admired and respected him. They remember him for many years after taking his courses.”

“He appreciated the ordinary — a plant, a particular tile, the sound of water, sunlight on a wall — and he loved Pomona and the LA County Fair,” Holder says. “I will miss our occasional lunches — tales from his travels, recommendations for not-to-be-missed art exhibits, and plans for the next trip, the next remodel project, another gathering of friends.”

Stavros, a native of Pennsylvania, earned his bachelor’s degree from Lafayette College in Easton, Pa. He received his master’s from Columbia University and his doctoral degree from the University of Wisconsin.

Stavros is survived by a brother, Peter; a sister, Marianne Mylonas; a nephew, Peter Mylonas; several cousins and great nieces and great nephews. Funeral services were held at the Hellenic Orthodox Church of the Annunciation in Easton.