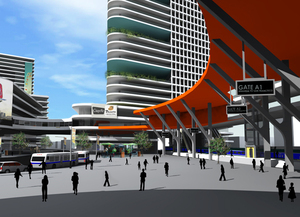 The Anaheim train station, a nondescript slice of asphalt and track wedged between Angel Stadium, the Orange Freeway and a medical clinic, is giving way to a sleek, multi-use transportation hub. Architectural giant HOK has been awarded the contract to design the 66,000 square-foot regional transit center, but Cal Poly Pomona graduate architecture students just might see a hint of their ideas in the completed project.

Six teams in Professor George Proctor’s urban design studio class unleashed their creativity last winter and spring, producing vibrant concepts that blended transportation, sustainability and urban living. Like many student projects at Cal Poly Pomona, it had a real-world dimension, and the teams approached the assignment as if they had been selected to shepherd the development.

“It’s a great advantage to work on a site with all of its assets and disadvantages,” says Jonathan Orr, one of the team members. “It lends a sense of realism because no site, project or development is ever completely ideal.”

The student teams visited the site, studied similar developments and met with the project manager for the Anaheim Regional Transportation Intermodal Center, or ARTIC, station, which is scheduled for completion in 2013. They focused on creating a development that maximizes public transportation in a high-density area and decreases the environmental impact of automobile-centered sprawl.

By the look of the designs, they succeeded.

One of the first things Christa Lewis and her teammates did was relocate the transit center to the intersection of State College Boulevard and Katella Avenue, magnifying its impact in the mixed-use area known as the Platinum Triangle, which is also home to the Honda Center, The Grove of Anaheim, urban lofts and a variety of dining options and businesses (The real project cannot be moved, but the students have significant latitude to nurture problem-solving and creativity.)

“For our team, it wasn’t about creating a train station,” Lewis says. “In order for a train station to be successful, we knew that it needed other design elements that would work toward sustaining the life of the station. Our solution was a metro center.”

The station flows into two office towers that feature prominent garden balconies that allow cross ventilation and passive cooling. Green space is abundant throughout the development, including the parking lots, which could double as places for weekend soccer games or farmers markets.

Orr’s team chose to work within the confines of the actual development.

“The freeway isolates the site from greater Anaheim,” Orr says. “We thought it would be interesting to address the challenges, which include significantly elevated levels of air pollution near the freeway.”

The team created large swaths of green space along the freeway to serve as a buffer and air-cleansing element, and it added a park along the Santa Ana River. The station design emulates the classic train sheds of the 19th century but abundant glass gives it an airy feel and allows the green space to flow through the building.
“Sustainability will be a prerequisite in the future,” Orr says.

Though the students were the main beneficiaries, the ARTIC project also reaped potential rewards.

“We’re encouraged to think outside the box since it’s an academic exercise,” Orr says. Architects and developers “often appreciate the student presentations because we’re allowed to offer ideas that might be otherwise untenable. We have more freedom to present alternative approaches, which can start a good discussion.”