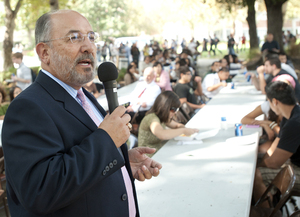 At the return of Pizza with the Presidents for 2010-11, President Michael Ortiz and ASI President Ismael Souley fielded questions from students on topics ranging from campus construction to the availability of classes.

Ortiz began the Oct. 14 noon-hour event by thanking Associated Students Inc. for its assistance in bringing free pizza back to the quarterly open forum. Due to budget concerns last year, free food had been eliminated and the event was renamed Brown Bag with the Presidents.

One topic of discussion was the additional $199 million set aside in the state budget for the Cal State University system. Some students wondered whether the new funding would allow the university to increase the number courses offered.

Vice President for student affairs Doug Freer said that while the university will admit students in winter and spring quarters, it will ensure that students have access to the classes they need.

“Our first priority is increasing the average unit load per student,” Freer said.

Some students expressed concern over the cost of construction projects such as a replacement for the CLA Building, the new business building complex and the new recreation center. Both Ortiz and Ed Barnes, vice president for administrative affairs, assured the audience that funding for such projects is not in any way linked to student fees. Barnes explained that the $30 million to build the business complex is funded by Proposition 1D, which was approved by voters in 2006.

Ortiz also discussed the merits of switching the university to the semester system, a possibility recently debated by the Academic Senate. Among the benefits for students would be a 20 to 25 percent reduction in the cost of purchasing books and better alignment with community colleges schedules. He said faculty input would be an important part of the decision process. Souley said ASI will hold a town hall discussion in November on the switch and that the Academic Senate will vote on the issue in December.

While the future of the state’s economic health is far from certain, a restoration of funding for the CSU in the recently signed budget allowed students to focus many questions on topics that might have taken a back seat to financial concerns last year. Several students wondered what Cal Poly Pomona is doing to be environmentally responsible, especially with regard to climate change.

Meaghan Smith, the university’s sustainability coordinator, and Ortiz outlined the university’s Climate Action Plan and touted the installation of a new solar array at the John T. Lyle Center for Regenerative Studies, which, for the first time, is able to completely meet the facility’s electrical needs.

Byron Howlett, interim director of student life, fielded questions about the role the cultural centers play for historically underrepresented groups on campus, and upcoming cultural events such as the crosscultural retreat and International Week.

To close the event, Ortiz and Souley reminded students of the upcoming gubernatorial election and urged them to vote Nov. 2.