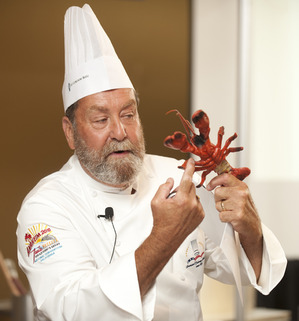 Jeff Brown, associate professor in The Collins College, remembers the first time he stepped into a professional kitchen in a restaurant. Barely a teenager, Brown bused tables and washed dishes at the neighborhood cafe.

“It was magical,” he says of walking into Embers restaurant in Arcadia. “There was stainless steel everywhere and men in toques.”

Forty-seven years later, Brown feels the same energy and exhilaration at the start of a new academic year. Brown, who teaches cooking and restaurant management courses, lives for the excitement of helping students overcome a challenge and watching lightbulbs turn on.

“It’s exciting. I get the same charge when the kids get it,” he says. “It’s fun to see the ones who had no self-confidence, no self-esteem absolutely sparkle and beam when you tell them, ‘Good job.'”

It’s evident that helping students shine is Brown’s passion and joy. Earlier this year, he was honored with the American Culinary Federation 2010 Chef Educator of the Year Award, the highest award in his profession. During the final selection process, he presented a 50-minute lecture and prepared Cajun barbecue shrimp, a dish he teaches in his professional cooking course, for a panel of professional chefs and educators.

“The demonstration wasn’t about my ability to cook,” Brown says. “It was trying to teach other people how to do a particular dish.”

In class, Brown is interactive, humorous and patient – probably too easy at times, he admits. He’s not a fan of chefs who yell and belittle others. As a culinary educator and mentor, he tries to find the best way to improve each person’s skills and abilities.

“I want people to succeed. I want them to enjoy learning and to have fun,” he says. “The kitchen is an enjoyable place to work – and not just at Cal Poly Pomona but in the working world.” 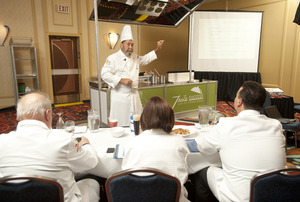 The combination of Brown’s food expertise and passion for teaching makes him a highly effective teacher, says Jerry Chesser, a Collins professor. “Jeff is a high-energy teacher who brings excitement and humor to the classroom. He works to connect with his students and bring the material to life,” he says. “Jeff puts into action his motto ‘Teaching skills that pay bills.'”

Brandon Heist, a senior, says Brown’s classes are always informative and entertaining, with stories from his professional career. Brown’s best quality is his patience, Heist says.

“Some people had prior experience working as cooks in restaurants, some had cooked at home with their parents, and some couldn’t even boil water,” he says. “Regardless, Chef Brown spent an ample amount of time with each and every student, honing their skills and sharing his culinary knowledge.”

Providing a solid foundational education is close to Brown’s heart. During his teenage and young adult years, Brown worked as diner cook, tableside chef and hotel restaurant chef. However, his career hit a roadblock when he applied for a promotion from kitchen manager to general manager at an upscale Palos Verdes restaurant. Simply put, management told him he didn’t have the required formal education.

“I might have had the skills and the knowledge, but I didn’t have the depth of knowledge,” Brown says. Work experience showed him the “how,” but he needed formal training to understand the “why.”

“When you know how to do something correctly, then you can break the rules. But if you don’t know the rules, then you can’t do that.”

Brown enrolled and graduated from the Culinary Institute of American in New York, received his bachelor’s degree in restaurant & hotel management from Webber College in Florida, a master’s in higher education administration from West Virginia University and a doctoral degree in education from George Southern University. His career highlights include working as personal chef to King Hussein of Jordan and the royal family, general and district manager for Velvet Turtle restaurants, and teaching at culinary schools throughout the country.

Even with his extensive experience in the kitchen and as an educator, Brown remains curious about food and cooking. In his world cuisine course, he always asks the international students for input, picking up tips and foreign phrases over the years.

“When we get to the Asian cuisine section, I turn it over to the students and learn how they or their moms make the dishes,” Brown says. “I steal stuff all the time.”

Brown enters his eighth year at Cal Poly Pomona this fall, and the excitement continues. Gesturing to his wife, he says: “Ask her what I’m like the night before a new year.”

(Photos: Jeff Brown competes for the Chef Educator of the Year title at the American Culinary Federation National Convention at the Anaheim Marriott on Aug. 2, 2010.)