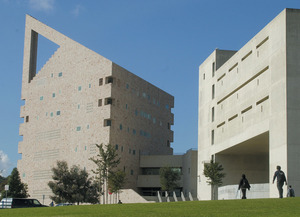 The CSU Board of Trustees will address on Tuesday, Sept. 21 a proposal to develop and construct a new student services building to replace the CLA building at Cal Poly Pomona.

Since its completion in 1993, the CLA complex (Building 98) has taxed operational budgets and personnel due to a number of construction flaws and mechanical system failures.

The building’s initial issue involved water intrusion and required the university to litigate against the prime building contractors. In planning for the building’s renovation, university officials had to also consider renovating the mechanical and electrical systems, reviewing and correcting ADA requirements, and bringing the building up to current seismic code. California law requires that any state structure undergoing major renovation be brought up to current building codes.

The cost to repair the CLA building is estimated at $80 million. The construction project would also require relocating personnel during construction, which would take approximately 18 to 24 months.

Cal Poly Pomona and CSU leadership, as well as external consultants, have concluded that a new facility would be the best use of public funds. The money to build the facility would come from the CSU Capital Outlay Program utilizing state construction bonds. The construction project would not impact the university’s general fund budget.

“The question has become one of weighing the costs involved in renovating the CLA Building and relocating employees for 18 to 24 months, or using the funds to build a new facility,” President Ortiz said in a message to the university community. “Even after this major renovation, the CLA would remain difficult to navigate, waste internal space, be energy inefficient and subject to future mitigation issues — and would still sit atop the San Jose Fault.”

If the Board of Trustees approves this project, the Facilities Planning & Management staff at Cal Poly Pomona will begin the planning work for the new building.

Editor’s Note: At its Sept. 21 meeting, the CSU Board of Trustees approved the proposal to move forward with plans to replace the CLA building. (9/22/10)