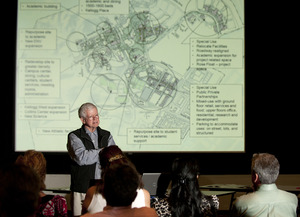 Faculty, staff and students who attended a series of workshops during Fall Conference got a glimpse of the university’s future – a future that they will have a say in forming.

The University Master Plan session offered a vision of how the campus landscape might change over the next 20 years. The plan, still in the discussion stage and therefore not final, includes developing a bicycle and pedestrian culture, moving vehicular traffic to the perimeter of campus, building a parking structure near Temple Avenue, and creating “neighborhoods” among the individual colleges surrounded by open space. The plan envisions reusing currently developed property rather than carving up green space for construction.

The master plan consultants, Sasaki Associates, say the timeline calls for approval in early 2011. Information about the Master Plan is available at https://projects.sasaki.com/calpolypomona/. 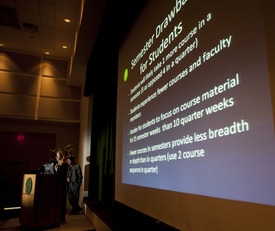 An ad hoc committee formed in May to explore the idea of an Academic Calendar Conversion, from a quarter system to a semester system. The committee will weigh both calendar options, hold town hall meetings in November, survey the campus community and make a recommendation to the Academic Senate in mid-January.

The semester system would provide 15 weeks of instruction, plus finals week, from late August to mid-December and from late January to mid-May. Proponents say that the semester calendar would align better with community colleges, other CSUs and K-12 schools; provide a slower academic pace; and the longer term would allow faculty to assign more in-depth projects.

Supporters of the quarter system say that it allows for more course diversity and elective classes, as well as more flexibility for students to retake courses or earn additional units toward a minor or double major. The campus’ limited classroom and lab space would not be as strained under the quarter system and faculty would have a lighter day-to-day workload, according to proponents.

For more information about the academic calendar conversion, including dates of the town hall meetings, visit www.cpp.edu/~calendar_convert/.

(Photo: Sandra Kapoor talks about the advantages of the quarter system.)

The University Strategic Plan session provided an opportunity to discuss the university’s goals and priorities. Provost Marten denBoer, who led the session, said a shared vision of common goals is an important step in moving forward.

“A plan is worth very little if it does not guide actions,” he said, emphasizing that collaboration is essential in the process, which will lead to setting priorities and acting upon them.

Among the eight goals listed in the plan are “student success through an engaging campus experience,” “excellence in our faculty and staff,” “a learning organization enhanced by a culture of evidence, academic excellence and scholarship,” and “financial resources to ensure educational excellence.” Information about the Strategic Plan is available at https://strategic.wiki.cpp.edu/Main_Page. 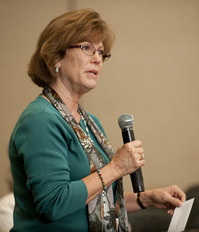 Claudia Pinter-Lucke, associate vice president for academic programs, led a discussion of the upcoming WASC accreditation team visit in mid-October. Several campus committees have worked for months to produce a report that will be presented at the Educational Effectiveness Review, but Pinter-Lucke emphasized that all members of the campus community have a stake in the outcome of the visit.

Besides reviewing the report and meeting with designated groups, WASC members will randomly query faculty, staff and students on their understanding of Cal Poly Pomona’s mission, vision and core values. With that in mind, those who attended the session were given index cards that contained questions the WASC team might ask.

“You may be called upon,” Pinter-Lucke said. “You need to be able to share your ideas.”

Information about the WASC team’s visit is available at www.cpp.edu/~wasc/. 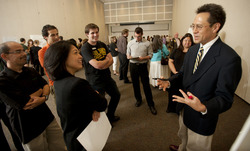 During his convocation address, President Michael Ortiz outlined the Graduation Initiative as a major priority for the university this year. A plan to increase the graduation rate (48 percent of students graduate in six years or less) calls for improvements in advising, curriculum and engagement.

During the workshop, participants provided input on the graduation obstacles for transfer students and disadvantaged students, issues in curriculum and instruction, and interactions among students and faculty that help students earn their degree. Suggestions included providing more academic clubs, mentoring from alumni and professionals in the field, professional development for faculty, and offering group advising options.

(Photo: James Bassett leads a discussion about the Graduation Initiative.)

Cal Poly Pomona’s popular Pumpkin Fest is back with lots of activities including three mazes, a petting farm, hayride and fall comfort food. Tickets are required. Craig Walters, director of…