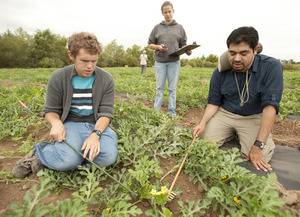 European honeybees have long been the favorite pollinator in commercial agriculture, but entomologist Joan Leong says farmers should give their wild cousins a shot at the full-time job.

Since 2006, scientists and farmers have been mystified by the sudden disappearance of the domesticated honeybees, a $15 billion to $20 billion industry, which are essential to pollinating about a third of the fruits, vegetables, nuts and other crops grown in the United States. Now, wild and native bees have been gaining some buzz-worthy attention as alternative pollinators.

In fact, Leong says, some wild species might be better qualified than honeybees.

“In our preliminary work last year, we found that after a single floral visit, several species of wild or native bees appeared to be better at leaving pollen than honeybees,” says Leong, a biological sciences professor at Cal Poly Pomona. “It demonstrates that honeybees aren’t necessarily the best pollinators on a per-visit basis.”

Leong has set out to show that wild and native bees are present and actively working in commercial watermelon farms in Southern California. Her project and initial results are similar to research efforts at Rutgers, UC Berkeley and UC Davis.

It’s a tedious task that requires researchers to spend hours observing bees, catching bees and enticing them with non-pollinated flowers. But if they’re right, native and wild bees could be a savior for farmers, especially those struggling with the short supply of the domesticated Europeans.

“Using wild or native bees can be a more sustainable strategy,” Leong says. “Honeybee production requires a lot of energy and resources for keeping colonies going and for transporting the hives to various farms. If wild bees are present and can do the job, growers may need fewer honeybees or none.”

Unlike domesticated honeybees, most of the 16 wild and native bee species Leong catalogued last summer at Spadra Ranch are not social creatures, meaning they don’t form hierarchical colonies that produce honey and support a queen bee. Instead, all but a few species live mostly solitary lives preferring tree hollows or ground nests.

In order to attract the natives, Leong says, farmers must create and protect friendly environments. This involves growing a variety of flowering plants year-round, less frequent tilling of the land, allowing wooded areas to flourish and being more judicious with pesticides.

Just after dawn in Irvine, environmental biology student Lancaster and Luken, who studies zoology, begin identifying unopened female flowers in a watermelon patch at Tanaka Farms, a family-owned property. They enclose each individual bloom in a small, netted bag. After the flower opens, students remove it from the vine and attach it to the end of a long pole. They try attracting a bee to visit the flower, record how much time the bee spent on the flower and note its behavior. Because watermelon flowers bloom for only a day, using a non-pollinated flower allows students to get a precise count of pollen grains, seen only through a microscope, that are left by a single bee visit.

“We think that certain bees leave more pollen on the flower, and we think that their behavior has something to do with it,” says Michael Ramos, an animal science senior. “It takes about 1,000 pollen grains to produce a good-size fruit, and studies have shown that you need 12 honeybee visits to reach that.”

Last summer’s results show a refreshing diversity of bee species. They range from the tiny halictid “sweat” bee to the quarter-size bumble bee to the familiar, domesticated honeybee.

During their field work, students observe which bees visit the watermelon patches and how often a single flower receives bee visits. They also capture samples to take back into the lab for examination and to identify the species.

Leong plans to publish her findings in a peer-reviewed journal. The project has received about $35,000 from the Faculty Fellowship program at the Lyle Center for Regenerative Studies, the CSU Agriculture Research Initiative, the College Cost Reduction and Access Act (STEM Pipeline project), and the ADVANCE grant.