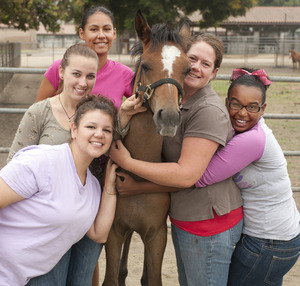 Oliver is like an annoying little boy – playful, mischievous, curious and always hungry. Sometimes, playtime gets rough with biting and kicking. Fortunately, his mothers — all five of them — are quick to forgive. After all, he’s only 5 months old.

Jackie Camacho, Jessica Velador, Allison Folkman, Jeanette Maner and Fiona O’Connor, all College of Agriculture students and live-in student employees at the Arabian Horse Center, adopted Oliver and have cared for him ’round the clock since he was born March 18. His mother, Barbs Mist, died when he was 12 hours old from pregnancy complications.

Being a surrogate mother is a full-time job, and the students organized shifts to feed Oliver every two hours, then every three to four hours as he grew older. The day he was born, they fed him formula in a bottle, then formula in a bucket, and gradually transitioned him to hay and pellets.

Breeders often fear that orphan foals will develop health problems because they don’t receive the rich, nutritious milk from a mare.

Not Oliver. He immediately took to his food and has grown larger than the six other foals born at the center this year. He has also developed a refined head and long neck – ideal characteristics for Arabian horses.

Not surprisingly, Oliver loves human company. Most foals are cautiously curious about people, allowing a few pats and scratches, and they always run back to their mothers.

Not Oliver. He nips at the girls’ shirts, pushes them around and demands their attention. If he’s feeling playful, he’ll start biting and kicking. The chestnut colored Arabian doesn’t realize that he’s much larger and heavier than his mothers.

“He treats us like horses. He doesn’t get that we’re kind of little,” Maner says.

Oliver, who was recently weaned, will soon leave the main stables of the Arabian Horse Center for the large, green pastures on campus. He will no longer need constant care, and that brings mixed emotions to his mothers.

“We love all the horses,” Velador says.

“But Oliver the most,” Maner adds.