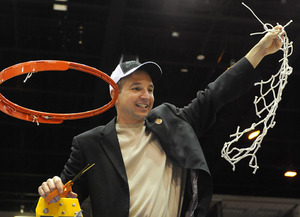 “Coach K” has been a moniker for Broncos head coach Greg Kamansky since he stepped on to Cal Poly Pomona’s campus in the late 1990s as an assistant coach.

“What an absolute thrill for our players, coaches, staff and university,” said Kamansky, who led the Broncos to their first national championship in March and national championship games in each of the last two seasons. “We’ll have an opportunity to savor the successes last season by playing against a program that represents the very best that our sport has to offer. It’s a once-in-a-lifetime experience and we look forward to the challenge of playing against a talented team that should be the preseason top-ranked team in the country and coached by one of basketball’s true icons and ambassadors.”

Cal Poly Pomona has more Division II Elite Eight appearances (four) than any other school in the country in the last eight years. Kamansky, who begins his 11th season as head coach, was named the 2010 Division II Coach of the Year by the National Association of Basketball Coaches and also the Division II Bulletin.

The Broncos, led by this season’s seniors Donnelle Booker, Tobias Jahn and Mark Rutledge, won the 2010 national title with a 65-53 victory over second-ranked Indiana, Pa., last year in Springfield, Mass. – the birthplace of the sport. Cal Poly Pomona finished second in the 2009 title game in an overtime loss to Findlay, which played at Duke last season and lost 84-48 before a crowd of 9,314.

Krzyzewski has won four NCAA titles during his 30-year tenure at Duke and owns an 868-279 record all-time, including a 795-220 mark at Duke. He is five wins shy of becoming the fifth coach in NCAA history to win 800 or more games at a school. Krzyzewski currently ranks fourth on the all-time coaching wins list and is 35 wins shy of passing Hall of Fame coach Bobby Knight as the winningest coach in NCAA Division I history.

A limited supply of tickets and ticket packages are available for the game. Contact Brandon Raphael, director of development, at (909) 869-2825 or bjraphael@cpp.edu for information.