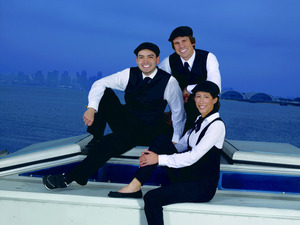 Food trucks, known for reheated breakfast burritos, greasy burgers and other fast food options, might seem like an odd place to encounter French cuisine, but a Cal Poly Pomona alumna is working hard to change that perception. Now, she has opportunity to show off her skills on a national stage in a new Food Network show airing Aug. 15.

Their mobile eatery has garnered the respect of foodies and earned the trio a spot on “The Great Food Truck Race,” hosted by celebrity chef Tyler Florence.

The show pits some of the country’s best food truck chefs against one other for a $50,000 grand prize. Every week, contestants will enter a different city – Santa Fe and New Orleans to name a few – where they will face a new challenge. In the first episode, chefs are given three days to prepare, promote and sell their food “by any means necessary,” according to the Food Network.

The idea for Crepes Bonaparte began when Law was a Cal Poly Pomona student studying abroad in Germany. Murcia, who was studying at USC at the time, visited Law and the couple became enamored with France and its street food scene, especially the delectable crepes sold on street corners. Law and Murcia appreciated the quality of the food and the simplicity of the presentation and wondered why Americans sit in gourmet restaurants and pay gourmet prices for what is so often a quick bite for the French. Law and Murcia soon committed themselves to launching their food business and Meyer later joined the effort.

Shortly after the truck, affectionately nicknamed Gaston, began roaming the streets of Southern California, a Food Network executive contacted Law, Murcia and Meyer and invited them to try out for the show.

“We definitely were shocked and we were really excited,” Law says. “At that point, our truck was still new; we were still trying to work out the kinks of our business.”

After two in-person interviews and a home video audition, Law, Murcia and Meyer were selected to be one of seven teams participating on the show.

As many restaurateurs and catering company owners know, business savvy is as essential as mouth-watering food. Law, Murcia and Meyer — self-confessed workaholics — devote much of their time to researching everything from the best locations for food trucks to municipal codes.

With limited resources for marketing and promotion, Law takes full advantage of social media sites to create a loyal following. Any time Gaston makes a stop, Law informs their 2,241 Twitter followers and 906 Facebook friends that Crepes Bonaparte is open for business. Law has also befriended food bloggers who promote Crepes Bonaparte in their reviews, describing the crepes as “deliciously unique” and “food heaven.”

“It takes a little bit of grunt work to get the information out there on the Internet,” Law says. “I think it’s worth it because the consumers are receiving information in a better way. It’s not an ad that’s being pushed in their face.”

Three years after graduation, Law doesn’t know where her entrepreneurial spirit will take her or Crepes Bonaparte, but she is enjoying the experience.

“I’m really grateful that I have reached this success so quickly after graduation,” Law says. “I do have to contribute that in some part to the great education and experience I received at Cal Poly Pomona.”