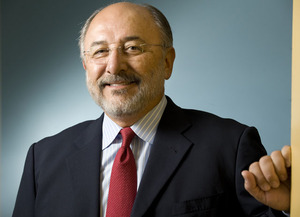 A Message to the Cal Poly Pomona Community:

During the spring 2010 term the first six-year review of J. Michael Ortiz, president of California State Polytechnic University, Pomona was conducted. The review took the form of collecting and summarizing letters from a selection of the campus and external community members. The review concluded on July 13, 2010 with a discussion of the review by the CSU Board of Trustees. The Board of Trustees and I appreciate the contributions of those who worked with us on this review.

The Board of Trustees has established criteria for assessing the performance of a president and of the institution. These measures include the overall management of the institution, relations on campus and within the system, educational leadership, community relations, major achievements of the campus and the president, and personal characteristics of the president. Faculty, staff, students, alumni, and community representatives were invited to submit written comments responding to the trustees’ criteria.

Among President Ortiz’ achievements cited by the review respondents were the completing of the goals listed as part of his three-year evaluation in 2006; completing the Campus Physical Master Plan and the Academic Master Plan; making significant fundraising progress in the comprehensive capital campaign scheduled for completion in 2013; creating a successful approach to manage the challenges of budget reductions; continuing public-private development efforts with the City of Industry and at Innovation Village in the city of Pomona; and building support for programs that provide assistance and guidance to students from low-income families and under-represented groups at the university.

When President Ortiz arrived on campus, he followed a long-serving predecessor. Review respondents gave him much credit for taking the time to develop an understanding of the university and begin to chart a course for its future. His open, input-seeking, deliberative, and collaborative approach to governance appears to have worked well at Cal Poly Pomona. His insistence on being a visible and accessible leader has been a major strength in guiding the institution through an era of change, particularly in light of the state’s challenging economic situation.

At Cal Poly Pomona, budget issues have been a dominant concern. President Ortiz has followed an approach that allowed for substantial participation across the campus, with every program and position examined and priorities established. During his tenure, he has completed the development of both an Academic Master Plan and a Physical Master Plan. Review respondents gave him credit for seeking and hiring outstanding senior administrators, for giving them strong support and substantial latitude in decision-making, and for his loyalty to them during difficult times.

Additionally, the review informs us that he has enjoyed good relations with the faculty, in part owing to his consultative style and communications skills, and in part because of academic program initiatives. Among the latter are the promotion of Cal Poly Pomona as a learning-centered campus, going beyond the classroom to the whole-student experience, and the priority placed on modernization of the library and enhancement of the honors program.

President Ortiz has made private fundraising a major priority. He has secured significant gifts, particularly facilities and he has launched a capital campaign with ambitious goals and an impressive measure of success ($80 million raised toward a 2013 objective of $150 million).

President Ortiz’s record of involvement with city and county political and business leaders promises good results for the fundraising campaign. He has been praised for building a strong relationship with the City of Industry, home to many important warehousing and manufacturing businesses and the city of Pomona, the home of Innovation Village.

It is clear that campus faculty, staff, and students highly value his visibility and accessibility, a symbolic manifestation of which has been his regular use of an electric cart to move himself around the extensive grounds of Cal Poly, encountering many people in the process of doing so. Campus and community members are also appreciative of the active and engaged presence of his wife Betty Faye.

President Ortiz and I discussed this review and established the following goals:

Dr. Ortiz is deeply committed to the success of Cal Poly Pomona and its students, staff, and faculty. He is an energetic, dedicated, motivated, and very capable president for Cal Poly Pomona, and he is appreciated by administrators, faculty, staff, students, and community supporters alike. He has transformed the institution into one that is widely respected and appreciated in the Pomona area and across the state. Together with his wife Betty Faye, he has come to represent the university as a dynamic and forward-thinking institution committed to excellence in education.