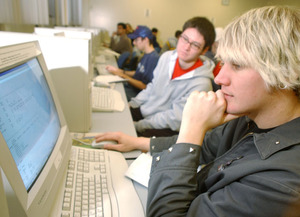 The golden ticket is an opportunity for a university to attract recruiters from Microsoft by sending a student on an all-expenses-paid informational visit. Based on the skills and personality of the student, as well as the university’s curriculum and reputation, Microsoft decides whether to recruit new hires from the university the following year.

“This is an extreme honor for our campus,” says Michael Marinoff, associate director of the Career Center. “Microsoft formally recruits from only a small handful of universities in the United States and internationally, and from only one other campus in Southern California, which is UCLA.”

Cal Poly Pomona caught the attention of Microsoft recruiters when computer science senior Jacob Curtis wowed them during a one-day visit to their headquarters in May, Marinoff says.

“Jacob was a perfect example of our Cal Poly Pomona students: He was knowledgeable, came ready to work and possessed excellent communication and teamwork abilities,” Marinoff says. “Because he impressed them with his skills, they want to recruit more of our students.”

Curtis says he learned about Microsoft’s team structure for engineers and programmers, and he realized that a position at the technology giant is within reach.

“Microsoft isn’t a big, mysterious company that’s not nice to work with. They have some of the smartest people in the world in jeans and T-shirts who are excited about their jobs,” Curtis says. “I’m not really scared of them anymore. I’m not reluctant to try out and apply.”

This fall, seniors graduating in June 2011 who are majoring in computer engineering or computer science will be granted an automatic interview at Microsoft headquarters in Washington. The students must have a paid internship during the spring or summer at a notable technology, aerospace, IT or engineering company. An information session will be held at the Career Center during fall quarter.